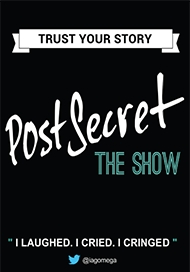 In late 2015 my wife Candace and I launched #HALLer to bring an exclusive group of social media influencers and friends together with artists in a unique experience. #HALLer creates the opportunity to sit down with interesting artists in conversation that is broadcast live through social media. #HALLer is not an interview, but an authentic exchange of thoughts, ideas and questions. Our inaugural #HALLer featured the Indigo Girls and garnered more than one million impressions throughout the hour we were live and trended #2 on Twitter in Canada (even with the Blue Jays playing in the World Series rounds while we were in session).

The next #HALLer event is one that we’re really excited about and I hope that you can join us by watching online and participating, too!

Frank Warren, Founder, Curator, Author of PostSecret will be joining us on April 18 between 8:00pm-9:00pmET on my Twitter stream. Frank is the founder and curator of PostSecret; an ongoing community art project where people mail in their secrets anonymously on one side of a postcard. The works have been exhibits in galleries and museums around the world including; MoMA. There have been six New York Times bestselling PostSecret books and the PostSecret blog has garnered over 750,000,000 hits. Frank continues to share secrets at colleges and events, including TED. He recently received the Mental Health Advocacy Lifetime Achievement Award. Every Sunday he continues to post secrets at his site and believes that our secrets can cut or heal.

#HALLer in working in conjunction with Mirvish Productions, who are bringing PostSecret: The Show to Toronto. The performance is an immersive, poignant journey through the humor and humanity of the personal stories we keep to ourselves, and on rare occasions, share with others. Projected images, videos, three actors and a guitarist guide the audience through crowd-sourced narratives revealing the true stories behind the secrets. Frank Warren, Internet phenomenon and recipient of the Mental Health Advocacy Lifetime Achievement Award, collaborated with an award-winning team of theatre professionals to bring PostSecret to life, theatrically, for the first time. With the bravery of Rent and the surprising honesty of The Vagina Monologues, PostSecret: The Show is a breakthrough in audience sourced storytelling that reaches beyond the confines of the stage, reminding audiences that secrets can be both walls and bridges.