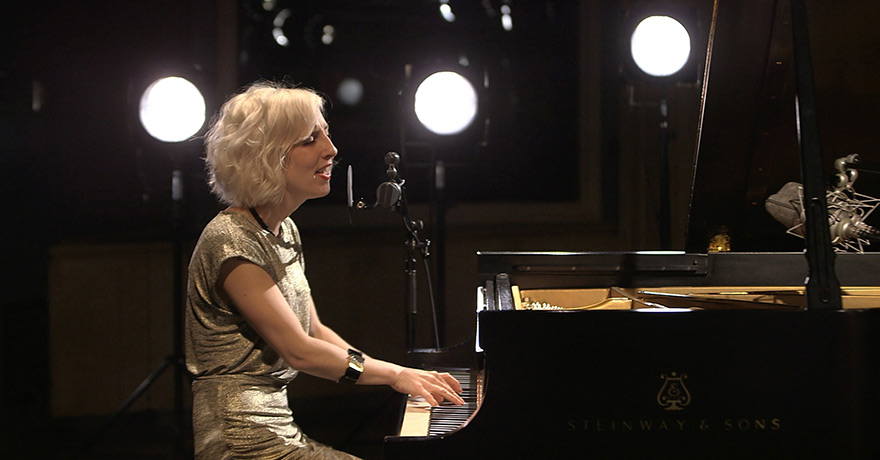 The Canadian Songwriters Hall of Fame (CSHF) is pleased to announce the induction of J’ai la tête en gigue into the Hall of Fame. This ironically ‘feel-good’ song was written by one of Quebec’s best loved singer-songwriters, Jim Corcoran. To celebrate the song’s induction, acclaimed singer-songwriter Ingrid St-Pierre performs J’ai la tête en gigue as part of the Covered Classics series, a collaboration between the CSHF and CBC/Radio-Canada that invites notable Canadian artists to perform their own rendition of a newly inducted song.

“As a songwriter, Jim Corcoran plays a very important part in my life. The first concert I ever attended was his; and I was all of seven or eight years old. Even though I was incredibly shy, I insisted on meeting him while he signed autographs,” says ADISQ nominated and SOCAN member Ingrid St-Pierre, “I mumbled something about becoming an actress and he told me to always believe in my dream and follow my instinct. I still remember it vividly. My mother used to sing me to sleep with Jim’s songs, and it’s now my turn to sing his songs to my boy.”

J’ai la tête en gigue was written in September of 1976 while Corcoran was driving through the Eastern Townships in Quebec. It was the beginning of colourful fall and the end of a love story gone wrong. The lyrics articulated themselves around one sentence: “J’ai la tête en gigue et le cœur en septembre” (loosely translated, my head is in a whirl and my heart is in September). The melody came around the same time as the words; and then, as was often the case for Jim, he worked on the song for months.

Anglophone by birth, Jim Corcoran became an aficionado of the French language, spending most of his musical career singing and writing in French. In 1972, he partnered with Bertrand Gosselin to form the popular folk duo ‘Jim and Bertrand’. They quickly became poster boys for Quebec’s New Folk Movement, but gained popularity outside of Quebec with their third album “La tête en gigue” released in 1977. The record won Best Folk Album at the Festival international de musique Montreux (Switzerland) in 1978, and was certified gold in 1982 by the Canadian Recording Industry Association (now Music Canada). In 2010, the song itself earned Corcoran a coveted SOCAN Classics Award for 25,000 radio plays.
“It’s a great honour to have my song, J’ai la tête en gigue, inducted into the Canadian Songwriters Hall of Fame,” says Jim Corcoran, “What a wonderful way to celebrate its 40th anniversary, and what a thrill to have this song included as part of Canada’s songwriting legacy.”

In 1981, Corcoran embarked on a solo career. He’s recorded over a dozen albums, performed around the world, won numerous awards, written lyrics for many Francophone artists as well as for Cirque du Soleil, and is the host of CBC radio show ‘A Propos,’ a national showcase for music from Quebec.