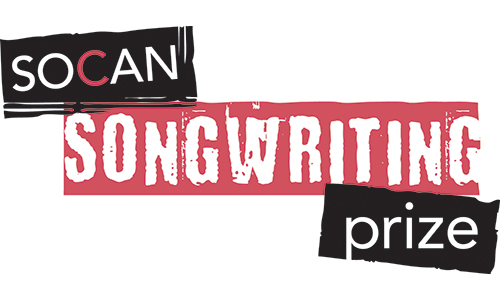 SOCAN has announced the finalists for the 11th annual SOCAN Songwriting Prize, a competition that identifies 10 outstanding songs in English and French written and released by emerging songwriters over the past year, with the music-loving public deciding the winners.

The 10 English and French finalists were each determined by independent panels of 15 music-industry experts (including myself) who were tasked to nominate two songs from any genre that they felt were the best songs written over the past year by “emerging” songwriters – defined as songwriters who only have released two full albums or less (not including EPs) up until the end of the eligibility period (see rules for complete criteria). All the nominated songs were then compiled, reviewed and voted on by each panel as a whole. SOCAN does not have a role in determining the nominees or winners.

The 10 English songs nominated this year are:

For two weeks, June 9-23, 2016, SOCAN invites music fans to vote for their favourite song from the nominees lot by visiting www.socansongwritingprize.ca or through Twitter using the hashtag #mySSPvote and identifying the performer’s name in the tweet. Fans can vote once a day through each platform for the English and French prize competitions. The English and French winning songs will be announced the week of July 12, 2016.

“These emerging songwriters might be tomorrow’s global superstars,” said Michael McCarty, Chief Membership & Business Development Officer at SOCAN. “We hope that the SOCAN Songwriting Prize helps these talented songwriters expand their fan base and get the attention they so deserve. Although there can only be one official winner, they’re all winners for creating such great songs to begin with.”