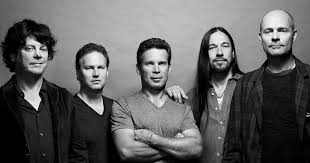 In 1996, Canoe.ca gave the opportunity for The Tragically Hip fans to interview the band. A few great questions were submitted, and this one stood out the most.

Q. Do you see it as your role or responsibility as public figures to be political? I remember seeing you at Molson Park in Barrie on Canada Day and Gord D. spoke bitterly about “Canada Day” and what we were celebrating that day.

I see our role or responsibility as musicians to be musical. We were a little uncomfortable with the way other musicians on the bill were treated. After an Evian bottle of urine was hurled at the stage it became a little difficult to go along with the whole Fraternal brotherhood thing. Probably a minority, but we had invited all those people as our guests, and we felt that we had assembled a cool and interesting day of music. It was that day that I began to think that booze together with Nationalism or Patriotism was a very dangerous mixture. Ultimately, I believe everything would have been way better if we’d done the whole thing on July 2nd — we could have celebrated the Canada of the Self and not the Canada that is sold to us.