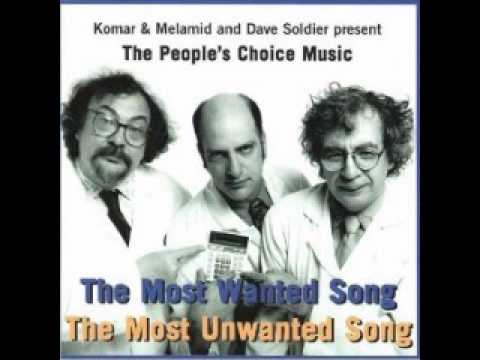 “The Most Unwanted Song” is a song created by artists Komar and Melamid and composer Dave Soldier in 1997. The song was designed to incorporate lyrical and musical elements that were annoying to most people. These elements included bagpipes, cowboy music, an opera singer rapping, and a children’s choir that urged listeners to go shopping at Wal-Mart.

For The People’s Choice: Music CD, “The Most Unwanted Song” was paired with “The Most Wanted Song,” which incorporated musical elements that were “wanted” by listeners, again as determined by a public opinion survey. Instruments such as guitar, bass, piano and drums, and lyrics about love were “most wanted” by the survey respondents, and are included in the song, which has been described as “Celine Dion-esque”.

The vocals for “The Most Wanted Song” are provided by Ada Dyer and Ronnie Gent; Living Colour guitarist Vernon Reid is featured on guitar.