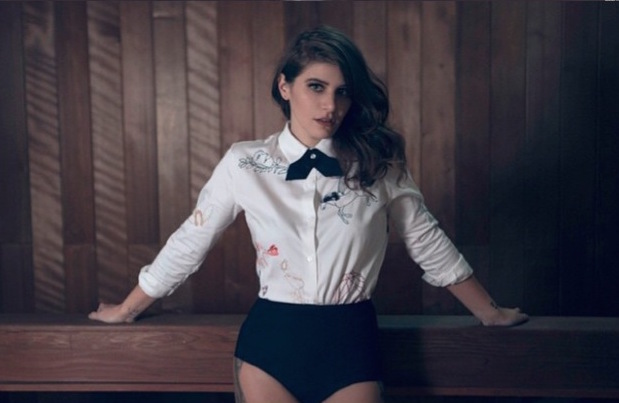 One of your later songs, “Jealousy,” talks about dealing with criticism and how you’d rather take the high road rather than stoop down to their level. You’ve mentioned in previous interviews how that was difficult to deal with at first and how you’re still experiencing it, from sexist critics who focus on your appearance onstage to people who still dismiss your writing as “childish.” How do you deal with this now as opposed to then?
Bethany Cosentino: I think at the end of the day I always just try to be myself. I have this attitude that’s very unapologetic, an I-am-who-I-am kind of attitude. It’s not just in music. It’s been much of my day-to-day life. I think that the person that I am in interviews and on social media and on stage, and all of that, is very reflective of the person I am day-to-day.

I think when people attack either the depths of my lyrics, or that I post too many selfies, it’s just some stupid criticism. I try really hard to not take it incredibly personally, even though it can be difficult because my business really is personal. It’s me It’s very much like Best Coast, myself as a female frontwoman, and as a person that’s in the spotlight.

How does it feel to know that through your lyrics and social media presence, you are actually giving voice to fans that deal with similar anxieties that you share in your music? They see you as a mentor and someone to reach out to.
I think it’s been a really cool experience for me to be very vocal about things like exercise and just taking care of yourself and ways to channel your anxiety into other things. It was a very long journey for me, and I still am trying to it figure out. Exercise helps, but it doesn’t fix it. It doesn’t cure it. There are still days where I am incredibly anxious or incredibly stressed. I’ll take a break to exercise and when it’s over I’m like, “Okay, I still feel like shit.”

Bethany Cosentino: That’s my approach to life in general. You’re never going to feel 100%. You’re never going to feel 100% perfect, or that things around you are totally great and amazing. That’s what I say to young girls and also young boys, and just people in my own age demographic and younger and older. They’ll say, “I deal with anxiety. What do you use to help yours?” To say exercise, and then to have somebody come back a couple months later and write me on the internet or whatever and say, “I met you in San Antonio and you told me to try yoga or pilates for when I get anxious, and it’s really helping”—that’s really cool, because as I said, it’s been a journey for me as well, trying to figure out something that really helped me as best as it could.

It’s nice to know that people trust me and trust my advice, because there are still days where I feel like I’m trying to figure it out. For the most part, most days, I think life can be confusing. I think it’s good to be realistic about things and give realistic advice. Sometimes, people come back to me and tell me that it’s worked for them or that it’s helped them in time. It’s a nice thing to know, and it’s nice to know that you are not alone in the search of trying to figure out how to center your thoughts and your anxiety and all that. It’s kind of like this club for weird anxious people. [Laughs]. I feel like I’ve created it in a way.