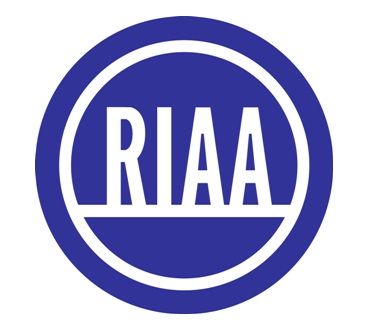 For the first half of 2016, strong growth in revenues from subscription streaming services more than offset declines in unit based sales of physical and digital music download products. Overall revenues at retail increased 8.1% on a year-over-year basis to $3.4 billion, the strongest industry growth since the late 1990’s. At wholesale, value increased 5.7% to $2.4 billion.

Revenues from streaming services continued to grow strongly both in dollars and share of total revenues. First half (1H) 2016 streaming music revenues totaled $1.6 billion, up 57% year-over-year, and accounted for 47% of industry revenues compared with 32% in 1H 2015. This category includes revenues from subscription services (such as Apple Music, TIDAL and paid versions of Spotify, among others), streaming radio service revenues that are distributed by SoundExchange (like Pandora, SiriusXM, and other Internet radio), and other non-subscription on-demand streaming services (such as YouTube, Vevo, and ad-supported Spotify). Paid subscriptions experienced massive growth in the first half of 2016. The entrance of new services like Apple Music and TIDAL, and growth from services like Spotify Premium, helped both revenues and the number of paid subscriptions more than double versus the prior year. First half revenues from subscription music streaming services surpassed $1 billion for the first time, growing 112% to $1.01 billion. 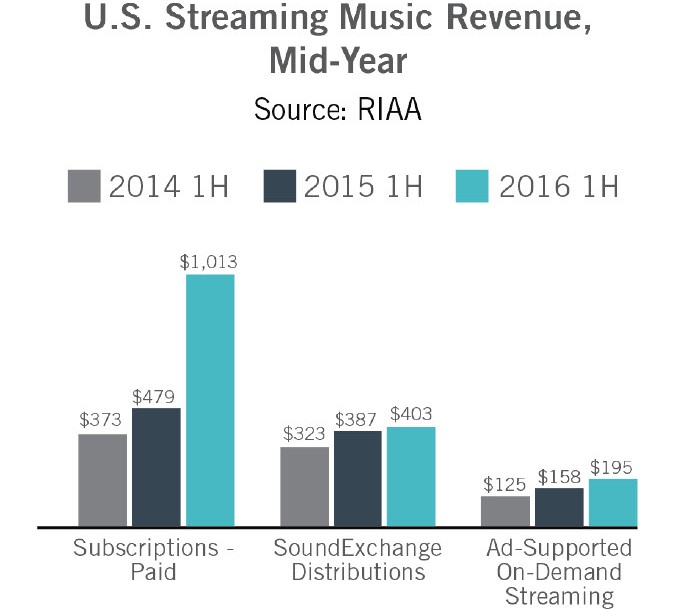 Subscriptions alone accounted for 30% of industry revenues for the first half of 2016, and the number ofpaid subscriptions grew 101% to average 18.3 million for the same period. The revenue growth from subscriptions alone more than offset the declines from physical sales and permanent digital downloads.

All three formats of streaming music had revenue growth in the first half of 2016. SoundExchange distributions grew 4% to $403 million, an all-time high for the first half of the year. On-demand ad-supported streaming grew 24% y-o-y to $195 million.

The total value of digitally distributed formats was $2.7 billion – up 16% compared to the 1H of 2015. Digital accounted for 80% of the overall market by value, compared with 74% for 1H 2015 (note Synchronization excluded from this figure). Revenues from permanent digital downloads (including albums, single tracks, videos, and kiosk sales) declined 17% to $1.0 billion for the first half of 2016. Digital albums continued the trend of outperforming individual tracks. The total value of digital albums was $500 million, down 11% versus the same period the prior year, and digital album units were down 15% to 48.2 million. Digital track sales declined by value 22% to $520 million, with sales volume down 22% to 432 million units. The total value of shipments in physical formats was $672 million, down 14% versus 1H 2015. CDs made up 66% of total physical shipments by value. Vinyl albums were down 6% by value for the first half of the year, and accounted for 31% of physical shipments by value. Synchronization royalties were $100 million for the first half of the year, virtually flat versus 1H 2015. These first half 2016 results illustrate the emergence of paid subscriptions as a primary revenue driver for the United States music industry. For the first time, paid subscriptions were virtually on-par with paid downloads as the biggest single format revenue source. Streaming became the overall largest revenue contributor by a wide margin.