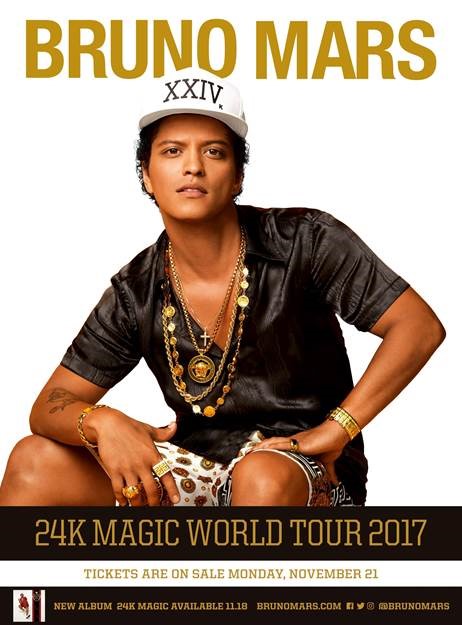 Grammy Award winner and world-renowned, multi-platinum singer/songwriter/producer/director/musician Bruno Mars, revealed details behind his massive upcoming global headline tour – The 24K Magic World Tour (pronounced twenty-four karat magic tour). The magic will begin March 28 at Antwerp, Belgium’s Sportpalais and will travel throughout Europe through June with shows set in London, Paris, Madrid, Zurich, Copenhagen, Berlin and more. The North American leg will follow kicking off July 15 at T-Mobile Arena in Las Vegas and then visit over 45 cities across the US and Canada before culminating with a four-night stand at The Forum in Los Angeles. A full list of dates is below. For complete details, please visit The 24K Magic World Tour official homepage. Tickets for The 24K Magic World Tour, produced by Live Nation, go on sale on Monday, November 21.