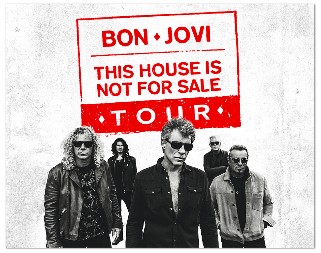 As one of Rock’s biggest bands, Bon Jovi’s legacy is as much about giving back as it is about anthemic performances and box-office-smashing tours. In that spirit, Jon Bon Jovi today announced on Facebook Live an opening act contest that allows bands to upload an audition for the chance to open an arena date on Bon Jovi’s upcoming 2017 This House Is Not For Sale Tour.

It is the third time in recent years that the Grammy Award-winning band has invited local and regional artists to share the stage (2006’s Have A Nice Day Tour and 2010’s The Circle Tour). Those chosen will demonstrate that they have the sound, style, and substance to open an arena show.  A different artist(s) will open for Bon Jovi on each one of the Live Nation-promoted concerts listed below.

Jon Bon Jovi said, “Every great band starts small and builds their rep one show at a time. That’s the opportunity we were given and now we want to pay it forward. If you’re ready for the arena stage, submit your audition tapes and join us in playing for the best audiences in rock music.”

Bands will upload audition videos beginning now at www.bonjovi.com/2017-opening-act-contest/ or the Bon Jovi and Live Nation Facebook pages. Submissions will be displayed in a live gallery for viewing and sharing.  Live Nation will choose 10 finalists, and Bon Jovi management will select the opening act contest winner for each tour date. All musicians who are selected as tour openers will be featured across Live Nation and Bon Jovi’s Facebook pages. For rules, visit http://livemu.sc/OACRules.

Winners will be notified they have won on the following dates:

First round of participating dates – winners announced on or about January 27, 2017:

Second round of participating dates – winners announced on or about February 4, 2017:

Third round of participating dates – winners announced on or about February 8, 2017:

Fourth round of participating dates – winners announced on or about February 26, 2017:

Fifth round of participating dates – winners announced on or about March 7, 2017:

Sixth round of participating dates – winners announced on or about March 12, 2017:

The This House Is Not for Sale Tour is Bon Jovi’s first outing since the band’s 2013 Because We Can World Tour, which was their third tour in six years to be ranked the #1 top-grossing tour in the world (a feat accomplished only by The Rolling Stones previously).  On tour, the iconic rock band will present anthems, fan-favorites, and new hits from their newly released 14th studio album, This House Is Not for Sale (Island/UMG). Tour dates are on sale now at LiveNation.com and through participating venue Box Offices. Bon Jovi Fan Club tickets, including exclusive VIP packages are on offer now as well.

Bon Jovi released This House Is Not for Sale on Nov. 4, 2016. The album debuted atop the Billboard 200 chart, giving the rock band its sixth No. 1. The title track reached the Top Ten of the AC Radio Chart (Bon Jovi’s highest debut on that chart to date). This House Is Not for Sale is Bon Jovi’s first major release since What About Now (2013), the band’s third consecutive multi-platinum album to debut at No. 1 on the Top 200 (Lost Highway in 2007, and The Circle in 2009).