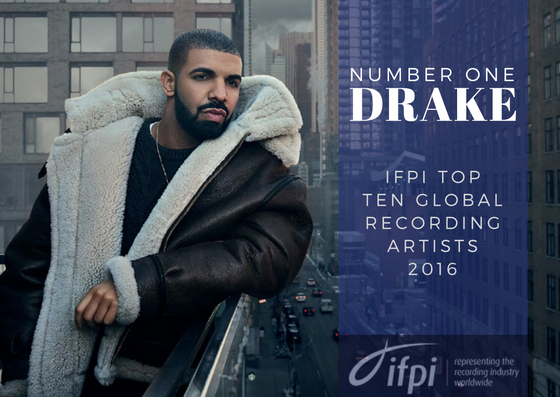 Drake has been named by IFPI as the world’s best-selling recording artist of 2016, highlighting the huge success of his fourth album, Views, which was released last year.

Drake is the fourth recipient of the IFPI Global Recording Artist of the Year Award, the unique and authoritative accolade that reflects an artist’s worldwide success across physical and digital formats, including downloads and streams.

Views became the first album to reach one billion streams on Apple Music, while One Dance, the album’s second single, was the first song to be played one billion times on Spotify. The follow-up singles Pop Style, Controlla and Too Good also all found huge success across the globe.

IFPI chief executive Frances Moore said: “I’m delighted to be able to honour Drake as the IFPI Global Recording Artist 2016. Drake’s phenomenal success reflects how deeply his unique sound appeals to an enormous global audience. The Global Top 10 list features a number of amazing artists, and the variety and vibrancy of their art speaks volumes about the exciting state of music today.”

In conjunction with the Global Recording Artist award, IFPI issued its annual Global Top 10 list. David Bowie, who took second place on the global chart, had released his album Blackstar two days before his death in January 2016. The album reached number one in 24 countries.

In third and fourth place on the chart, respectively, were Coldplay and Adele whose 2015 albums A Head Full of Dreams and 25 remained immensely popular throughout 2016.

The IFPI Global Recording Artist award and Top 10 chart is the first and only ranking to accurately capture the global sales of artists’ music across streaming channels, as well as sales of digital and physical albums, and digital and physical singles. The previous recipients of this prestigious award are One Direction (2013), Taylor Swift (2014) and Adele (2015). The full 2016 list includes: