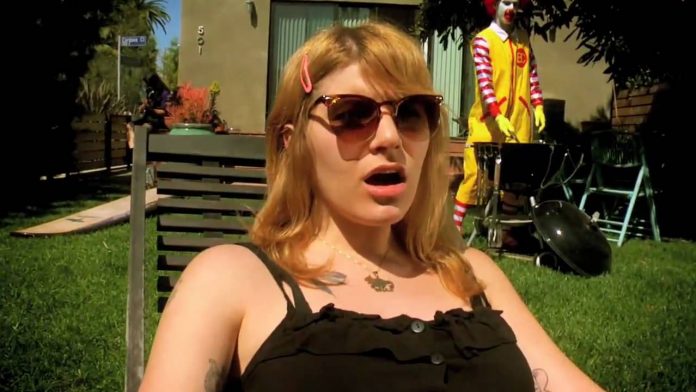 You’ve been an activist musician for more than 20 years. Is it ever dispiriting to still be railing against the same sexism on a song like “Mr. So and So” that you were calling out as a young person?

No, it feels euphoric, actually. Now I’m the one in control. I get to go out and sing that funny song. People might think, “She’s such a tough-as-nails, feisty little firecracker feminist” or whatever, but I’ve had to be nice to sound guys who were treating me horribly because I didn’t want them to turn my vocals down during the set. That’s just the nature of the work. But I’m able to deal with the emotions that have to do with keeping quiet and all of the more insidious forms of sexism.

I just think it’s totally hilarious that I get paid to sing about it. Back in the ’90s these were things we didn’t talk about. I would sing songs about mansplaining before that was a word. But I’m really happy that mansplaining is a word! All of a sudden it’s this thing that everyone gets, and that’s expanding our ability to talk about things.

There’s been a lot of talk recently about the commodification and marketing of feminism. How does this wave of trendy feminism differ from what you experienced with riot grrrl?

The second fanzine my band wrote was called “Girl Power,” and then, what do you know, three years later, the Spice Girls were like, “Girl power!” I’ve seen the commodification thing. But that’s why we’re artists — we just keep coming up with new ideas. People are going to steal them. That’s how rock ’n’ roll was invented — get real. This isn’t the first time or the last time that things are being appropriated. I don’t consider myself a victim in any way. I’m very lucky as a feminist artist to get the attention that I’ve gotten.

I understand people who are [upset] when things like the Stanford rape are still happening. You can’t wear a Sleater-Kinney T-shirt or be really into Beyoncé’s “Lemonade” and be like, “Everything’s O.K. now.” I totally get it. But the fact of the matter is that I got into bands because I wanted to make feminism cool. I mean, “Ally McBeal” was cool; feminism was not cool. So I said, I’m going to be the Pied Piper, the gateway drug, and try to get people into this because I was lucky enough to go to college and be given a feminist book.

If Beyoncé is going to have the word “feminist” written behind her in lights and she’s going to write “Formation” and talk about black power, I’m not going to say she’s fetishizing stuff. It’s not a good career move. It’s not like you go through the record books and see all the feminist musicians who just really cleaned up. Let’s not put down people who have enough power to spread stuff beyond our little punk-rock world or our feminist academic world. Everyone is invited to this party.