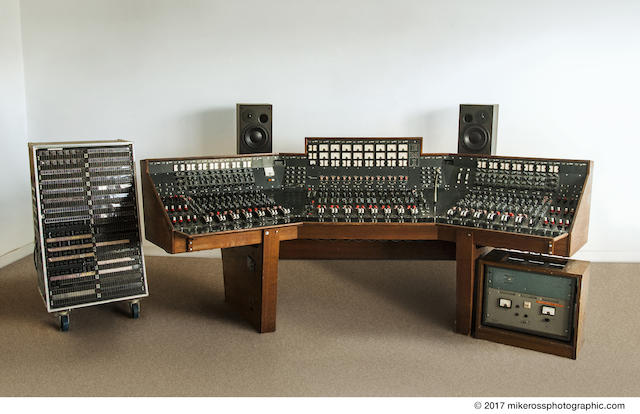 The greatest of all consoles is in full working order and will hit the auction block on March 27th for a yet-to-be-disclosed opening bid.  An Abbey Road Studios EMI TG12345 MK IV recording console used between 1971-1983, housed in Studio 2, the console which Pink Floyd used to record their landmark album, The Dark Side of the Moon can now be yours.

Also used by many other artists including Paul McCartney and Wings, George Harrison, Ringo Starr, Kate Bush and in later years The Cure, the desk comprising of (takes a deep breath) 40 channels with limiter/compressor on each, 4 echo returns and 16 monitors, MK3 feature cassettes, track monitor cassettes, dual channel 16 track sync mixer, two banks of 12 pairs of microphone channels, 8 pairs of main channels to centre section, monitor level controls for tracks 1-8 on left and 9-16 on right side, Ernest Turner manufactured VU meters comprising 16 full size VU meters and approximately 50 channel VUs, quadrant radial faders by Painton, with approximately 1600 capacitors (many original), housed in the original semi-wrap-around frame made of block board with teak and mahogany veneer, which disassembles into three parts, together with a patchboy of steel encased in industrial standard flight case and made-to-measure freight crates for the console parts (speakers in the illustrated image not included); accompanied by letters concerning the provenance, including one from Ken Townsend, the Abbey Road Studio Manager at the time and future Chairman; a documented history from Brian Gibson, the renowned Studio Technician for Abbey Road and TG console world authority; a current technical appraisal stating the console is in working order; PDF manuals for the equipment; and a copy of the album The Dark Side of the Moon.
More details and images of the magical console can be seen on the official site for the prestigious auction house Bonhams.