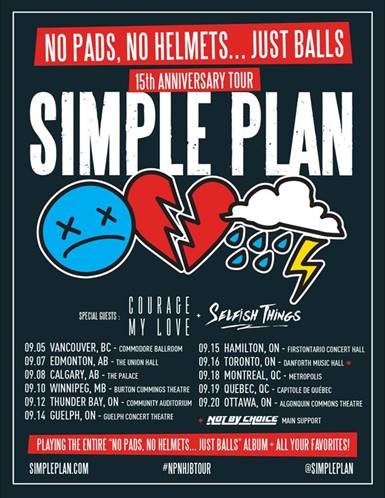 Multiplatinum Canadian pop-punk icons Simple Plan have announced a Canadian tour in celebration of the 15th anniversary of their 2X Platinum debut album No Pads, No Helmets….Just Balls. The band is currently in the midst of the first U.S. leg of the “No Pads, No Helmets….Just Balls 15th Anniversary Tour,” which sees the group performing their first album in its entirety alongside other fan favorites.  The wildly popular tour – which kicked off on March 19th – the same date that No Pads, Ho Helmets….Just Balls was released in 2002 – has already sold out shows in New York City, Chicago, Boston, San Francisco, and more.  A second leg of the U.S. will begin in August, before the band tours Canada throughout September. Tickets will go on sale this Thursday at 10 AM local time. All dates are listed below and tickets are available at http://www.simpleplan.com/tour.

Just before heading out on the anniversary tour, the band explained in a note to fans, “we felt it was important take this opportunity to look back and celebrate the amazing adventure we’ve had as a band and as friends… “No Pads, No Helmets…Just Balls” changed everything for us and we are so excited to play all these songs again and relive a time in our lives full of so many amazing memories.” Read the note in its entirety below.

On the Canadian tour, the band says: “We can’t wait to come back and tour Canada, our home country, where everything started for us. We wrote this album in our parents’ basements in Montreal, recorded it in Toronto and did our first shows and tours all over this country so it’s gonna be a very special moment for us to come home and do this tour for our Canadian fans.”

Joining Simple Plan for all Canadian dates will be Kitchener, ON-based trio Courage My Love. Toronto band Selfish Things will open all shows except Toronto. Canadian punk-rock band Not By Choice will reunite after over a decade for a special one-night only set at the Toronto show on September 16.

Last year, Simple Plan released their latest album, Taking One For The Team. The album, produced by Howard Benson (My Chemical Romance, All-American Rejects) features “Boom,” “Opinion Overload,” and “Singing In The Rain.” The band recently released a heartfelt video for “Perfectly Perfect” off of the album. Lead single “I Don’t Wanna Go To Bed (Feat. Nelly),” reached the top 10 in 25 countries spanning Vietnam and Brunei to Russia, Taiwan, and The Philippines. The album debuted at #1 on iTunes in 10 countries including Canada, Singapore, Mexico, Czech Republic, Thailand, Switzerland, Prague, Japan, Cambodia, and Macau; as well as debuted in the iTunes Top 10 in 25 additional countries.

Simple Plan has earned widespread acclaim and a global fan following for their genre-defying blend of classic punk energy and modern pop sonics. Since coming together in 1999, the Montreal-based combo has achieved worldwide sales in excess of 7 million, with releases including 2x-platinum debut, No Pads, No Helmets…Just Balls, 2004’s 3x-platinum-certified follow-up, Still Not Getting Any, and 2005’s platinum album MTV Hard Rock Live. 2008’s platinum-release Simple Plan proved an planetary blockbuster upon its release, reaching the #1 spot on the iTunes Store’s “Top Pop Albums” chart while also scoring top 3 successes in Mexico, Brazil, Japan, and the band’s native Canada. Get Your Heart On! – released in 2011 – found Simple Plan joined by an array of like-minded artists, including All Time Low’s Alex Gaskarth, Weezer’s Rivers Cuomo, and UK songstress Natasha Bedingfield. Singles like “Jet Lag” and “Summer Paradise” – the latter released in two distinct versions featuring Somali/Canadian rapper K’Naan and GRAMMY® Award-winning dancehall superstar Sean Paul – were both worldwide smashes, earning chart success and commercial milestones including earning gold, platinum, and multi-platinum sales in Australia, Austria, Canada, Denmark, Germany, Italy, and Switzerland.

“It’s hard to believe that this year, we will be celebrating the 15th anniversary of our debut album “No Pads, No Helmets…Just Balls”. To commemorate this very special milestone, we are extremely excited to announce that we will be heading out on tour performing our entire first album all over the US. Even cooler, the tour kicks off on March 19th, the exact date the album came out, back in 2002.

These last 15 years have been an incredible journey for us. From rehearsing and writing songs in our parents’ basements to selling millions of albums and playing shows all over the world, we got to live so many of our dreams because of this band and we couldn’t be more grateful. The best part is that we got to do it all with the same 5 friends who started the band together; we couldn’t be more proud of that!

After releasing our 5th album last year and playing more than 100 shows in over 40 countries, we felt it was important take this opportunity to look back and celebrate the amazing adventure we’ve had as a band and as friends. It felt important to do something special, something we’ve never done before to mark this landmark in our lives. This is why we wanted to do this tour. “No Pads, No Helmets…Just Balls” changed everything for us and we are so excited to play all these songs again and relive a time in our lives full of so many amazing memories.

More than anything, we wanted to do this tour for you, our fans, who have been there since day one, supporting us and giving us the chance to do what we love the most in life. So many of you have told us how much these songs have meant to you over the years and how this record had a big impact on your lives. We wanted to do this tour to celebrate the emotional connection we all share with these songs. We hope these shows can make you feel like you’re just a kid again, make you want to sing your heart out and bring you back to a time where nothing mattered except listening to music, hanging out with friends and going to concerts.

2017 is gonna be an amazing year of celebration for the band and we really hope you’ll be able to join us for these very unique shows. Thanks for all your support and see you very soon!”