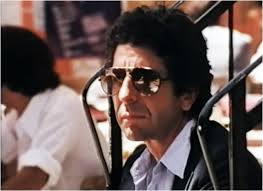 The Leonard Cohen interview as a whole is amazing because of how early it was in his career and how intelligent and compelling the line of questioning was by Kathleen Kendel, but a few things stand out in this interview. 1974 was basically at ground zero in the middle of the second wave of Feminism, and Kathleen Kendel takes the opportunity to engage Leonard Cohen on the possibility of sexism in his song Joan of Arc. The questions stirs Cohen to a thoughtful response.

It’s very hard to really untangle the real reasons why you do anything. But I was always interested in music and it seemed to me I always played guitar. I always associated song and singing with some sort of nobility of spirit. The first songs I learned were of the workers movement. I always thought that this was the best way to say the most important things… I don’t mean the most ponderous or pompous things. I mean the important things — like how you feel about things, how you feel about someone else — and I always thought this was the way to do it.

It’s also very difficult to untangle influences because you represent the sum of everything you’ve seen or heard or experienced. The kind of language that I’d like to have been influenced by the Bible and Cervantes, by the old masters. The kind of sensibility I’ve been influenced [by], of course, [is] a great deal by the French writers — Camus, Sartre — the Irish poets — Yeats — the English poets. And, of course, we had our own little group of poets in Montreal years back, all very fine, one man especially standing out — I think one of the finest writers in the language — Irving Leighton. I don’t think he’s known [outside Canada] at all.

Metallica: ‘72 Seasons Global Premiere’ Coming To Movie Theaters April 13 For One Night Only

Daniel Caesar Releases New Single “Do You Like Me?”