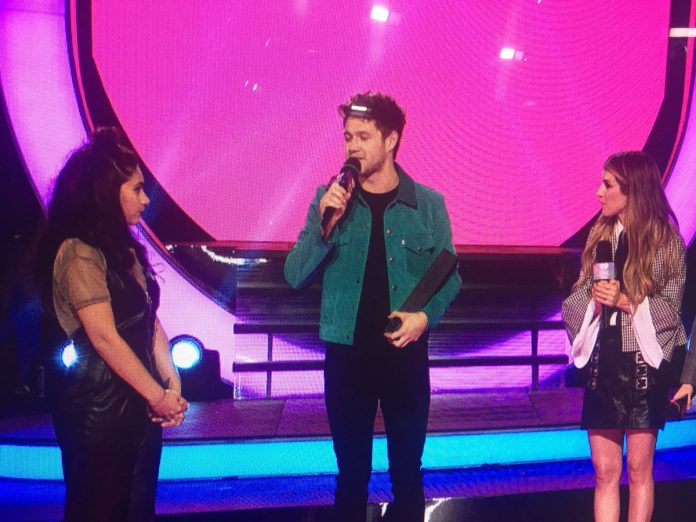 Alessia Cara and Joe Jonas reigned Toronto tonight as hosts of THE 2017 IHEARTRADIO MUCH MUSIC VIDEO AWARDS, where Canadian DJ collective A Tribe Called Red took home their first ever hardware for Video of the Year (“R.E.D.”) and Best Director (“Stadium Pow Wow”, Kevan Funk). Meanwhile, hometown hip-hop sensation Drake won two awards for Most Buzzworthy Canadian and IHEARTRADIO Canadian Single of the Year for “One Dance”. On stage, newly minted solo artists Camila Cabello and Niall Horan, winners of the awards for Best New International Artist and Fan Fave International Artist or Group respectively, each fired up the fans with red-hot medleys of their hit singles, “I Have Questions/Crying in the Club” and “This Town/Slow Hands”.

Canadian indie rock band Arkells hit the stage with an unforgettable performance of “Knocking At The Door” which snagged an MMVA for Fan Fave Video. Winners of IHEARTRADIO International Duo or Group of the Year Imagine Dragons also delivered an electric performance with local drum line 416BEATS on a medley of their hits “Believer” and “Thunder”.

Debut MMVA performers included DNCE, fronted by host (and MMVA veteran) Joe Jonas; Julia Michaels, who performed single “Issues” in a lavish bedroom set; Iggy Azalea who rocked the crowd from inside a lit cube with a version of “Switch”; hometown rapper Jazz Cartier with an energetic performance of singles “Tempted” and “Red Alert”; and Post Malone who brought explosive versions of “White Iverson” and “Congratulations”, replete with actual fireballs. Lorde, in her much-anticipated return to the MMVA stage, lit up the night, closing the show with a medley of hit “Green Light” and “Perfect Places” alongside a choir featuring more than 30 singers, and show-stopping fireworks.

Tonight’s awards also captivated audiences across multiple social media platforms, with more than 250,000 mentions of the show. On Twitter the MMVAs trended internationally, becoming the #4 trending topic worldwide, and the #1 in Canada, during the two-hour broadcast. MMVA performers and presenters joined in, posting about their experiences on social feeds, including presenter Nikki Bella who shouted out Much’s own Tyrone Edwards on Twitter, and MMVA host Joe Jonas who shared a fun backstage moment. Fans also made their voice heard this year, with more than 16 million votes for the award’s four Fan Fave categories cast across Twitter, Instagram, and on Much.com

In its inaugural year via a partnership with Twitter, the IHEARTRADIO MMVA PRE-GAME, hosted by Much Digital Studios creators Alayna Fender, Dan Rodo, Marlon Palmer, and Michael Rizzi, was first to hand out the hardware before the big show. Twelve awards were handed out on Twitter during the live pre-show, including the first MMVA for A Tribe Called Red, who along with Director Kevan Funk were awarded with the Best Director Award for their video Stadium Pow Wow.

And the winners are…

iHeartRADIO International Duo or Group of the Year
Imagine Dragons