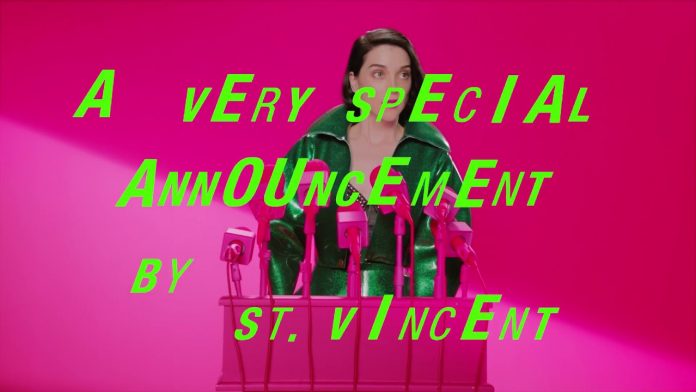 St. Vincent has announced the “Fear the Future Tour,” her first extended run of dates in over two years. The tour begins October 17 in London and concludes December 2 at Brooklyn’s Kings Theatre.

USA pre-sale registration begins today at 10AM ET. Global fan pre-sale begins June 27. General on-sale for the entire tour begins Friday June 30. Fans will be able to choose from standalone show tickets as well as the “Fear The Future” Enhanced Experience – including tickets plus signed poster, photo with St. Vincent’s guitar, film screening and more. A full list of tour dates is below.

The “Fear The Future Tour” announcement comes in the midst of an eventful year for St. Vincent (nee Annie Clark). The GRAMMY®-winning artist and “bona fide guitar god [and] pop visionary” (Rolling Stone) made her directorial debut in February when ‘The Birthday Party’ from the ‘XX’ horror anthology premiered at the Sundance Film Festival (she also wrote and scored the piece). More recently, she was named ambassador for Record Store Day 2017, recorded a 7” single with John Legend to benefit Planned Parenthood, and unveiled updates to her signature collection of Ernie Ball guitars.