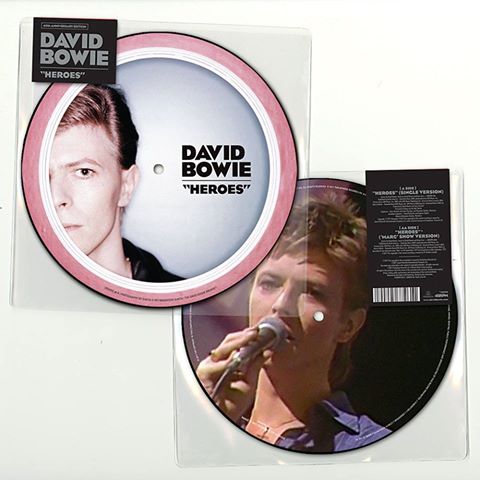 On September 22, 2017 one of David Bowie’s most celebrated tracks “HEROES” will be released as a special limited edition 40th-anniversary 7″ picture disc on Parlophone.

Originally released in the UK on 23rd September 1977 “HEROES” was the first single to be taken from the album of the same name, the second of the so-called ‘Berlin Trilogy’ of albums.

“Heroes” was recorded in English, French and German and has over the past forty years become an inspirational anthem. When Bowie performed the song in West Berlin in 1987 with the Wall as a backdrop, thousands of East Berliners could be heard singing and cheering along; Bowie later described it as one of the most emotional performances he had ever done.

The AA of the 7” picture disc is a previously unreleased live version of the track from Marc Bolan’s ‘Marc’ ITV show, the first time public performance of the song. The track was recorded on the 7th of September 1977 but wasn’t broadcast until later that month by which time Bolan had passed away in a tragic accident.

“Heroes” is one of Bowie’s most-covered tracks with the likes of Prince, Blondie, Oasis, Nico, Depeche Mode, LCD Soundsystem, Peter Gabriel, Janelle Monae, King Crimson, Philip Glass, Kasabian, TV On The Radio, The Wallflowers and many more have performed it.