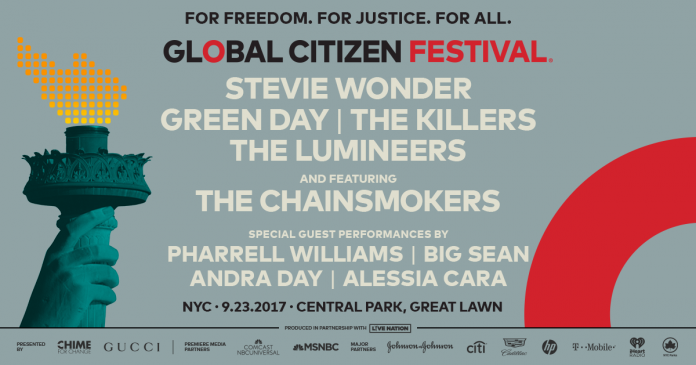 Steve Wonder. The Killers. Green Day. The Lumineers. The Chainsmokers — these artists and more will be playing to a crowd of some 60,000 Global Citizens in New York City’s Central Park on Sept. 23.
And the best part — those Global Citizens will be there because they took action as part of Global Citizen’s campaign to end poverty and fight inequalities by 2030.

The musical artists will stand together with Global Citizens to call on leaders in the US and around the world to uphold their responsibility to end poverty, tackle climate change, and fight inequalities by 2030.

“In this crucial time, there is nothing more exciting to me than having the honor of giving my gift of song, words and motivation to the Global Citizen Festival,” Stevie Wonder said. “When we commit ourselves to life issues, we are showing love of the Most High. I was, I am and will always be, a citizen connected to the spirit of everyone on this planet moving forward. Let’s go!”

Green Day lead singer Billie Joe Armstrong said: “We’re grateful to be a part of this year’s Global Citizen Festival. American aid programs make a significant difference in the betterment of lives at home and around the world, and we should all want these programs to become stronger, not weaker. We all play a part in seeing this mission through and it starts with calling on all our leaders.”

“We can’t wait to get back to our hometown of New York City and play for 60,000 people who have done amazing things to change the world,” The Chainsmokers said. “We are so thankful to our fans for getting online and taking action to support less fortunate people around the world. We’ll see you on Sept. 23!”

“Over the last year, we’ve seen voters around the world reject the nationalism and isolationism that keeps people living in extreme poverty,” Global Citizen founder and CEO Hugh Evans said. “Now, we are calling on activists and music fans to use their voice to change the world. … Now more than ever, we need to ensure we work together for the world’s poor.”

In the months leading up to the festival, Global Citizen will be campaigning to create real change in the areas of education, food and hunger, health, gender equality, water and sanitation, and US foreign aid.
The New York City festival is the sixth annual one in New York City, and follows festivals held in Hamburg, Germany in July and Mumbai, India , and Montreal, Canada , in 2016. Since the start of the Global Citizen Festival in 2012, 10 million actions have been taken, set to affect 1 billion lives by 2030.

For the fourth consecutive year, MSNBC & Comcast NBCUniversal will air a live simulcast of the full concert on MSNBC and MSNBC.com. The Festival will be produced by Emmy Award-winning producer Ken Ehrlich (Grammy Awards). The show will also be stream live on YouTube.