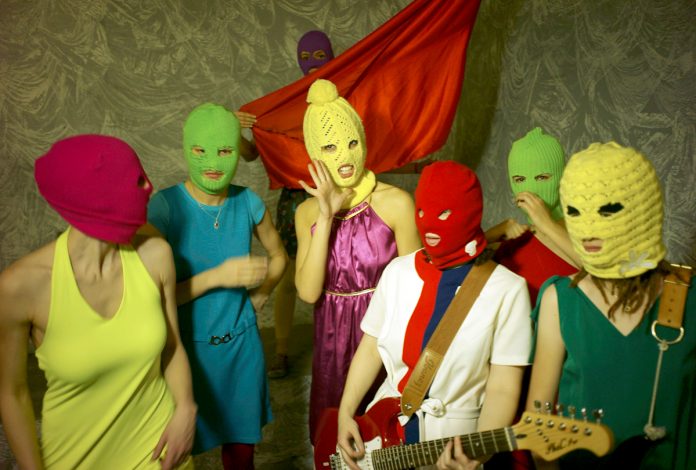 How wonderful is it to be living at the same time as Pussy Riot, the Russian feminist protest punk rock group based in Moscow, who continuously put their safety and lives on the line every single time they take a stand for what’s right. Founded in August 2011, their provocative guerrilla performances in public places, performances that were filmed as music videos and posted on the Internet, performances that mean something, is almost eclipsed by the fact these are real human beings behind their message. Instead of grumbling when we see something we don’t like, or agree with, we should just be happy that the brave and powerful Pussy Riot exist, that they changed music and politics, that they’re working towards a better world. I know many musicians inspired by Pussy Riot taking up causes like feminism, LGBT rights, and opposition to Russian President Vladimir Putin (or, in these artists’ cases, whoever is in power in their own country), to use music as a weapon, their lyrics as actions, and their voice to be heard.

This is why, right now, you need to support them. The group has a few weeks left of their Kickstarter campaign, and once I finish writing this line, I’m going over to the site to donate. I urge you to do the same. Below is a personal note from Nadya of the group, and below are photos of some of the photos and prints they’ll send you as a way to say thanks.

’m asking for your support in an exciting new project. Pussy Riot, together with the award-winning, London-based theatre company Les Enfants Terribles, is working on a breakthrough immersive theatre project that will open in London this November.

This wild theatrical experience will allow the audience to become a participant, experiencing exactly what Pussy Riot went through during our imprisonment – from the original Church performance, to the court trial and prison cells. We’re going to recreate Russian courtrooms, a real Russian labour colony, solitary confinement cells, priests who shout about banning abortions and many more absurd, but real-life things that exist in Russia today.

The audience will actually get the chance to re-live each one of these experiences themselves, learning what it means to be a political opponent in Russia today. We’ll take you on a journey from the cathedral altar deep into the vaults of the Kremlin itself. Hopefully, this is a journey that you’ll only have to make once in your life.

We’re hoping that this production will be funded by regular people from around the world who are excited about the idea of political immersive theatre, and we need your help! In order to ensure its launch we need to pre-fund this high-tech production – and fast. All the money raised will be spent on renting the space, the set design, employing actors and staff for the show’s 6-week run and making those rooms in London look exactly like solitary confinement cells in the Russian prison I did my time in.

This is an important project that has immense educational value, especially given the trying times in which we are living and an increasingly scary political world order. If we do it right, the production is set to be mind-blowing.