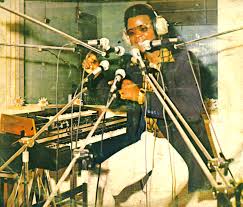 William Onyeabor passed away in January of this year, and for a lot of music fans, his passing went fairly unnoticed, but not by funk fans or vinyl crate diggers. He was a Nigerian musician and businessman, and was widely heard in Nigeria in the late 1970s and early 1980s, but he remained an enigmatic figure, private and reclusive.

Onyeabor’s songs are often heavily rhythmic and synthesized, occasionally epic in scope, with lyrics decrying war and sung by both Onyeabor himself and female backing vocalists. In the 2010s, some of his songs appeared on various compilations, most frequently his biggest hit, “Better Change Your Mind”, which appeared on Africa 100, World Psychedelic Classics 3: Love’s a Real Thing – The Funky Fuzzy Sounds of West Africa, and Nigeria 70: The Definitive Story of 1970’s Funky Lagos, through labels such as Luaka Bop.

In 2014, the music website Noisey, affiliated to Vice magazine, released a 31-minute documentary entitled Fantastic Man that documents Onyeabor’s history and legacy as well as Noisey’s attempt to track him down for an interview. In December of that year, William Onyeabor made his first radio appearance on the Lauren Laverne Show on BBC 6 Music, where he stated “I only create music that will help the world,” while also admitting that he had never played live, and announcing that he had plans to release new material.

So, a strange one, indeed. There’s only audio clips found on YouTube, but here’s the doc from Noisey:

And for a good sense (as much as anyone can), here’s Luka Bop’s statement on William. Once you finish reading, go check him out.

It is with incredibly heavy hearts that we have to announce that the great Nigerian business leader and mythic music pioneer William Onyeabor has passed away at the age of 70. He died peacefully in his sleep following a brief illness, at his home in Enugu, Nigeria. An extraordinary artist, businessman and visionary, Mr. Onyeabor composed and self-released 9 brilliant albums of groundbreaking electronic-funk from 1977-1985, which he recorded, pressed and printed at Wilfilms Limited—his personal pressing plant in southeast Nigeria.

For people in his hometown of Enugu, Nigeria, Mr. Onyeabor was simply referred to as “The Chief”. He was known for having created many opportunities for the people in his community. In his early 30s, he traveled the world to study record manufacturing, so that he could build, “the greatest record manufacturing business in all of West Africa.” After those successful years as an artist and record label President in the 1980’s, he opened a flour mill and food processing business. In 1987 these new business ventures saw him awarded West African Industrialist of the Year—just two years after the release of his most successful song “When The Going is Smooth and Good”, and what should have been the height of his musical career. He was given the honorary title “Justice of the Peace”—a local judicial position elected by the community to provide independent legal ruling. In the early 1990’s, he became the President of Enugu’s Musician’s Union and Chairman of the city’s local football team, The Enugu Rangers. Despite all of these extraordinary achievements, his biography was always shrouded in mystery—some claimed he had studied filmmaking in the Soviet Union, while others placed him in France or Great Britain. To his great amusement (and ours too for that matter), this mythic image was at times so deeply ingrained, that we often encountered people who were convinced that he didn’t actually exist. Whenever we shared this with him, or would ask him a question about his past, he would just smile and say, “I only want to speak about God.”

After five long years of painstaking waiting, negotiating and intense research, we were finally able to release “Who is William Onyeabor?” in 2013 and his music and story took the world by storm. The release was featured in major newspapers, radio and television stations around the world. Time Magazine listed him as number 4 on a shortlist of that year’s best albums. In 2014, the film documentary “Fantastic Man” followed, as well as the “Atomic Bomb! Who is William Onyeabor?” live shows, which travelled to the most regarded festivals and music venues worldwide-starring over 50 special guests from many diverse generations, genres and backgrounds.

Still, William Onyeabor would never speak about himself and for a long time refused any of the many interview requests that came his way. For an artist that had never performed live in his entire life, he repeatedly, and very sadly, would always decline our invitations to take part in any of the joyous celebrations that were created in his honor. Having become Born Again in the latter part of life, he had turned his back on the music from the earlier part of his life.

As one of the absolutely smartest people we ever encountered—William Onyeabor was always in charge, whatever the situation may be (and even though he was living in a fairly isolated part of rural West Africa). As can be heard in many of his songs, he looked at the world from a bird’s eye view. He would watch American, Chinese and European news simultaneously, so he could learn about the different points of view from around the world. In his later years, he was still conducting business as usual. Whenever we visited him in Nigeria, he welcomed us warmly into his home. Whether it be at his palace outside of Enugu or via crackly phone lines to America, he always made us laugh. As is also very evident in his songwriting—another example of his true intellect and originality—he had the greatest sense of humor. His life and accomplishments will never cease to astonish us. More than anything, and still to this very day, his music continues to live on—nearly 40 years after it was originally released.

Chief William Ezechukwu Onyeabor is survived by his wife, children, and four grandchildren. We would like to send our deepest condolences to his family and thank each and every one of you who has helped share the love for his music around the world.

In the short and wonderfully intense nine years that we came to know him, he changed our lives in many ways. If he hasn’t yet, we hope he will affect you too, one day.