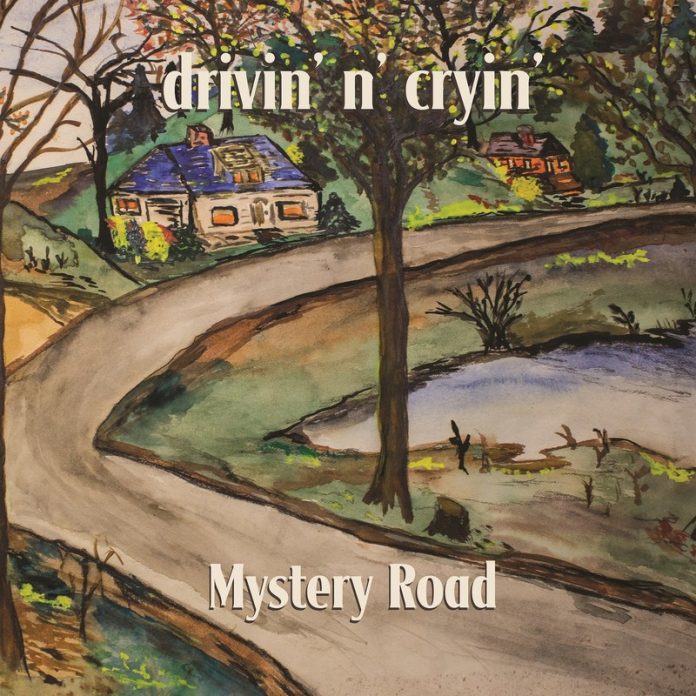 With its hard-charging mix of driving rock, country twang and punk rock sneer, Southern rock stalwarts Drivin’ N’ Cryin’s third album Mystery Road quickly became one of the band’s most beloved records when released in 1989. Called a “classic of the genre” by the Washington Post, the album contains two of the Atlanta band’s best known songs – the anthemic “Honeysuckle Blue” and the galvanizing sing-along “Straight To Hell,” which nearly three decades later are still fan-favorite fixtures in the road warrior’s live sets. On October 6, Island Records/UMe will release an expanded edition of the long out-of-print Mystery Road featuring the remastered original album along with nine previously unreleased demos produced by Peter Buck of R.E.M. The album, which includes essays from Buck and the band’s former manager, veteran music industry exec James Barber, will be available as a double LP, single CD and digital. A limited edition of 500 LPs will be pressed on opaque teal vinyl and be available exclusively via The Sound of Vinyl: https://thesoundofvinyl.us/drivin-n-cryin-mystery-road-expanded-teal-2lp.html

“Mystery Road really exemplified the split personalities of Drivin’ N’ Cryin’,” says singer, songwriter and guitarist Kevn Kinney. “I really felt that the crossroads of Americana were not limited to country and folk and there was more to it than just Townes and Hank Williams. Why not Aerosmith? Why not a little Quicksilver Messenger Service? What about The Seeds and The Trashmen and The Ramones? We have stuck to this thesis in rock n roll ever since. I continually ask the music listener to challenge and confront the label system of the musical industrial complex. Mystery Road was our first real chance to do that.”

With a band name meant to reflect the duality of their music, Drivin’ N’ Cryin’, comprised of Kinney, bassist Tim Nielsen, guitarist/dobroist Buren Fowler and drummer Jeff Sullivan, wasted no time driving their unique approach home on Mystery Road, produced by Scott MacPherson and Kinney and Nielsen. “Ain’t It Strange” opens the record with a fiddle-laden jig that belies their Southern rock sound but is quickly followed by “Toy Never Played With,” a hard rocker complete with all the touchstones of late ’80s rock n roll – big guitars, big drums and howling vocals. Throughout the album’s 11 tracks, the band expertly vacillate between a range of genres – from folk to punk to rock and country – and back again.

In addition to Mystery Road sounding better than ever with a fresh remaster, the expanded edition contains demos produced by Peter Buck previously unreleased until now. “We had a whirlwind demo session at John Keane’s studio in Athens with Buck producing,” reveals Kinney. “Peter is our hero. Then and now. He’s a positively energetic music collector, reflector, professor. He had seen us from our very first shows, sometimes one of five people at our Athens gigs. We ran into R.E.M on the road in St. Louis after we finished our record Whisper Tames The Lion and I remember playing it for him in the hotel where the band was having an after show hangout. He didn’t like it and I was a little crushed. He invited us to stay at his house and we brought a lot of the half-baked songs we had written in the practice room and at the soundchecks. Many of the songs were just ideas such as the riff in ‘Honeysuckle Blues’ and the complicated Aerosmith Zep of ‘You Don’t Know Me’ and ‘Malfunction Junction.’ I think we would have made a great final record together but not everyone was sold that Peter had the time to dedicate to the record because of R.E.M.’s schedule. I disagreed but in the end it wasn’t my money.”

Many of the demos that didn’t make Mystery Road were the basis for Kinney’s first solo album, MacDougal Blues,produced by Buck at John Keane’s studio. One track however didn’t make either album but did give Mystery Road its name. Listen to “Mystery Road” here: http://www.youtube.com/watch?v=63jiOprBDig

Celebrating their 32nd Anniversary together, Drivin’ N’ Cryin’ have spent most of 2017 on tour. With Dave V. Johnson as their drummer and the band’s newest member Laur Joamets now being added to the lineup, Drivin’ N’ Cryin’ is continuing to tour the U.S. to great acclaim.

In October 1985 Drivin’ N’ Cryin’ played their first show at Atlanta’s famed 688 Club. The band quickly gained attention for its blistering live shows and amassed a rabid fanbase in the fertile soil of the late-1980s Southeast music scene. Now, 32 years later and releasing four full length albums on Island Records and one on Geffen Records, founding members Kinney and Nielsen find themselves enjoying a milestone anniversary for the band, having survived the pressures of fame, a shifting musical landscape, multiple lineup changes, and miles of backroads and highways to arrive here.

With a gold record, 10 full-length albums, and a handful of EPs to their credit, the band still refuses to rest. In 2012, a documentary about the band entitled “Scarred but Smarter: Life n Times of Drivin’ N’ Cryin'” was produced. In 2015, a collection of 10 choice cuts from the band’s 4-EP “Songs” series, entitled Best of Songs, was released on Nashville’sPlowboy Records. Additionally, the band was inducted into the Georgia Music Hall of Fame the same year. The following year, Drivin’ N’ Cryin’ released a vinyl-only album, entitled Archives Vol One, with a collection of basement recordings from the years 1988 to 1990.

Twenty-eight years on, Drivin’ N’ Cryin’s Mystery Road standout “Straight To Hell” continues to resonant stronger than ever. Country star Darius Rucker has cut the song for his upcoming new album, When Was The Last Time, joined by fellow superstars Luke Bryan, Jason Aldean and Charles Kelley of Lady Antebellum. Earlier this week, American Songwriter featured the timeless song as their “Lyric of the Week,” exclaiming: “Georgia’s Drivin’ N’ Cryin’ derived its name from the two general categories into which their songs tend to fall. ‘Straight To Hell,’ the band’s wonderfully woeful track from 1989’s Mystery Road, certainly falls closer to the “cryin'” part of the equation. But it rises above your typical tears-in-your-beer song thanks to the telling details, the sly sense of humor, and the idiosyncrasy of the narrator’s tale.”

Comfortable with their past and confident in their future, Drivin’ N’ Cryin’ has an arsenal of songs, a full tank of gas, and no plans of stopping any time soon.