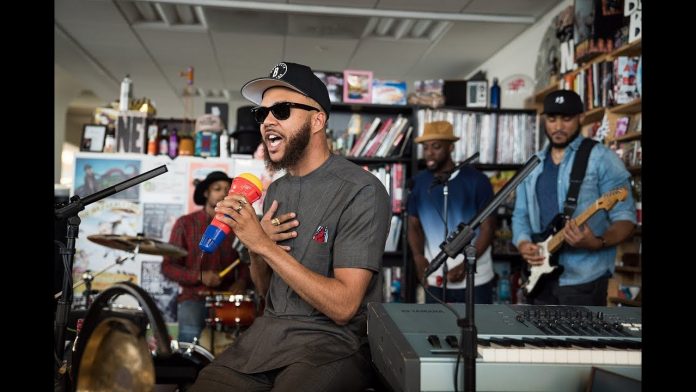 “Classic Man,” the 2015 debut single from Nigerian-American MC Jidenna, caught everyone off guard. The song found him teetering between rapping and singing about elegance, politeness and Nat “King” Cole, and the melody felt irresistible. Then there’s the look: He rocks thrift-wear tailored to a T. The song eventually went double platinum and earned a Grammy nomination. Jidenna followed it with a few more club bangers before releasing his debut album, The Chief, earlier this year. A tribute to his father, a Nigerian chief, the record is peppered with African rhythms and themes.

Jidenna and his band recently visited NPR to perform three reworked selections from The Chief. They excitedly explored every nook and cranny of the Tiny Desk in search of props, eventually settling on a toy, the magic microphone, a tambourine and a bottle of whiskey. Jidenna bounced straight through “Trampoline” to “Long Live the Chief,” in which he explains why his threads are always so sharp:

You can either sink, swim or be the captain
Get the last word I’ma get the last laugh in
Now they say, “Jidenna, why you dressing so classic?”
I don’t want my best-dressed day in a casket

Finally, the band pauses, glides into the arresting harmonies of “Bambi,” and finishes charming the socks off the entire room.