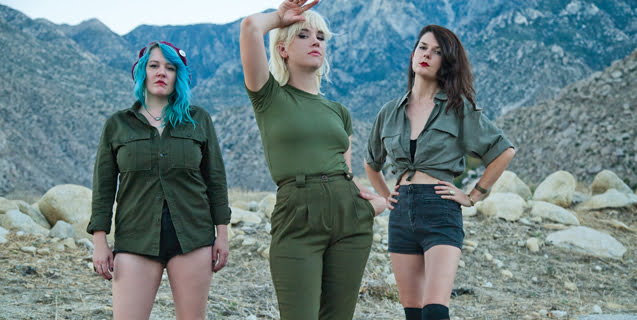 Bleached released their latest body of work via Dead Oceans, an EP titled Can You Deal? The centerpiece is its title track, which speaks to Jennifer still having to field questions about her gender in interviews, instead of her art. If you can believe it, this has been happening to the sisters since they were in a punk band in their teens. This EP shows the band trying to make listeners see beyond gender and really hone in on the music that’s being made; Bleached wanted to drop the labels and make people aware that it’s 2017, and yes, women are playing rock ‘n’ roll.

Why did you decide to make a zine with the EP? How did you go about getting the awesome contributors?Jennifer: When we wrote “Can You Deal?” as a band, I had to figure out what I was going to sing about. I thought it was a really cool song where I thought that anything I would sing about would be more noticeable lyric-wise, because there are some chanty parts. So, I thought I wanted to sing about something I care about, which I usually do, but I felt like it was a chance to say something that mattered. We kept getting interviewed with the same questions: “What’s it like to be in a girl in a band,” or “What’s it like to be an all-girl band,” even though we have a male drummer. I was just like, I’m gonna sing about that. We had a punk band when we were teenagers and got these questions over and over. I felt like it was the same questions 10 years later, so I thought it was finally the time to say something about it. It was fresh on my mind, so that’s how that topic got brought up among Bleached.

Our manager said we could take it further and talk to other female musicians about it. I was a little bit nervous to actually email anybody, because once I did it, I was making myself vulnerable. I had talked to other female musician friends and how it’s annoying. What do you do? What do you say? I just emailed 10 friends that I knew that would maybe be interested, and then some people started emailing people for me. I got so many responses. People were so stoked on the idea. It was awesome. I was so glad I took that leap of faith and decided to email a bunch of people to see if they wanted to be a part of the zine. It snowballed from there and became bigger than I expected. I imagined it would be midnight at a Kinko’s throwing it together, copying and stapling everything. Now, it’s way beyond that. We have a printer doing it. There are so many people participating in it — either artists submitting personal essays, lyrics or poems. Now there are so many amazing people. We thought it would be a better idea to make it look a little nicer. We started out with 500 [copies], but it sold out really fast, so we added a few. All of the money made — other than reimbursing the printer — is going to Planned Parenthood.