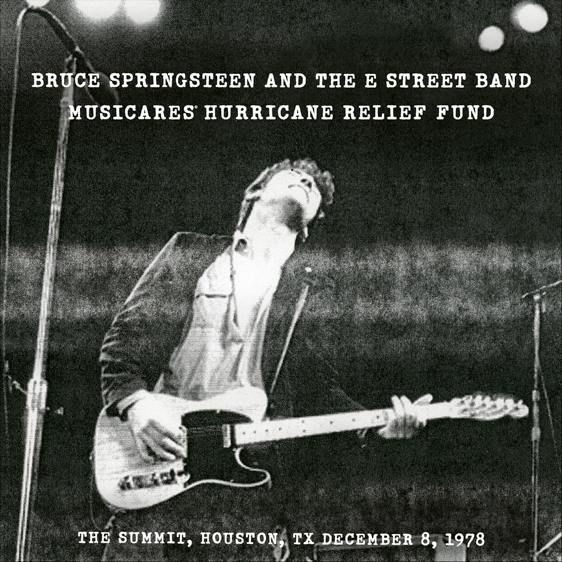 Bruce Springsteen is releasing an entire 1978 show with the E Street Band in Houston, Texas. The release will benefit the MusiCares® Hurricane Relief Fund, which will aid those affected by the recent devastation in Texas as well as in Florida.

The Houston show originally appeared as part of the Darkness on the Edge of Town box set. It captures the final leg of the Darkness tour, including the extended intro version of “Prove It All Night,” the rarely performed “Streets of Fire,” and Darkness outtakes “Fire” and “Because the Night.” It also features prototypes of The River’s “Independence Day,” “Point Blank” and “The Ties That Bind,” plus a rare September song, “Santa Claus is Comin’ To Town.”

Houston was one of Bruce’s earliest springboards, which accounts for the presence here of early favorites “Fire” and “Saint in the City.”

Bruce, the E Street band, Sony Music and nugs.net will donate all their proceeds to the hurricane relief effort.

Houston ’78 is available now as MP3 and hi-res downloads including audiophile grade MQA, or as a 2 CD set. You can order it today at  live.brucespringsteen.net, Bruce Springsteen’s official live recording service powered by nugs.net.

“Fans had been asking for a stand-alone audio release of Houston ‘78 since the Darkness box set came out several years ago,” says nugs.net CEO Brad Serling. “Its release-ready availability gave us the opportunity to move quickly to support people in Texas and Florida.”