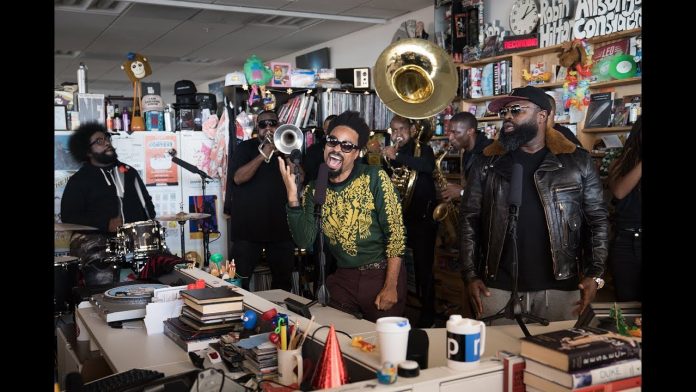 Can you believe it? Yes, those are The Roots packed behind the Tiny Desk. Black Thought, Questlove and the crew carved out a few hours in their hectic Tonight Show schedule to visit NPR headquarters in Washington D.C. Why travel four hours for a 12-minute concert when you own the late-night airwaves? The answer can be found in the lyrics to The Roots’ new song, “It Ain’t Fair.”

Armed with the incredible vocalist Bilal, The Roots performed the signature track from Detroit, a film about the race riots in 1967. “It Ain’t Fair” glares unflinchingly, takes a knee and raises a fist against the societal construct that has systematically denied equality of experience to those “presumed inferior,” to quote one of Bilal’s verses. And it achieves all this while covering its heart with its right hand. This reflective hymn tenderly yanks your heart strings and offers a window into the ethos of those who would like to stand for the flag but cannot in good principle, lest these same evils continue to exist.

Those lucky enough to be in the Tiny Desk audience witnessed masters at work. Black Thought is truly one of the most intelligent emcees ever, and his razor-sharp lyricism was on full display. Questlove, a musical and cultural historian nonpareil, was both a metronomical and moral anchor. It felt like the culmination of decades of academic rigor and boom-bap sessions, fittingly backed by a seven-piece horn section. Bilal’s falsetto-laced vocals and warm resonance evoked powerful messaging reminiscent of Curtis Mayfield’s “Don’t Worry,” delivered with the eccentricity of Prince.

Late last year, Common premiered “Letter to the Free” at the Tiny Desk and later won an Emmy for the song. It wouldn’t surprise me if “It Ain’t Fair” becomes another award-winning performance when the Oscars roll around early next year. This is a song that deserves to be heard in the millions of households that watch The Roots every night.