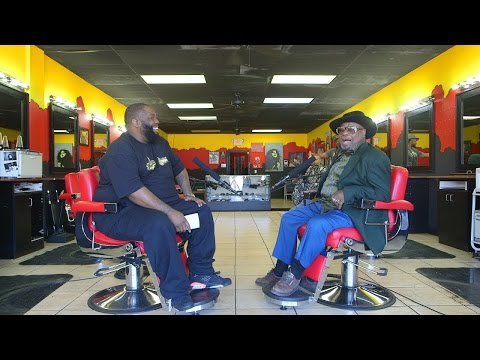 The 42-year-old rapper Killer Mike, of Run The Jewels, and the 75-year-old funk legend George Clinton, founder of Parliament and Funkadelic, may be from different generations, but it turns out they have a few things in common: They’ve both created music that seemed commercially risky at first, yet ended up transcending genres and creating a new audience. And they both embrace music as a force for social change.

It also turns out they’ve both owned barbershops — and that’s no coincidence. Both men say the businesses allowed them the financial freedom to take creative risks.

So NPR brought the two of them together at Killer Mike’s SWAG Shop — the Shave Wash And Groom Shop — in Atlanta. They settled in for a wide-ranging conversation that covers everything from barbershop philosophy to the birth of Funkadelic to Clinton’s work with Outkast and other members of the Atlanta hip-hop scene.