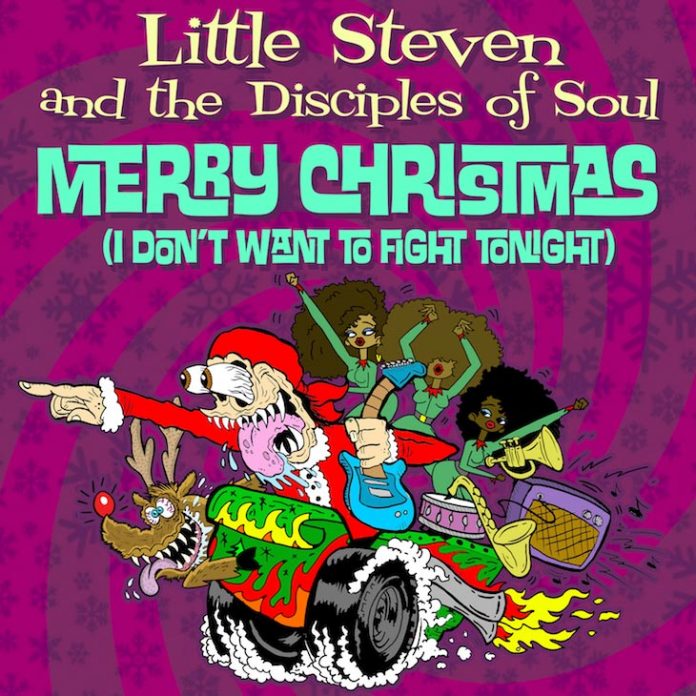 Little Steven and the Disciples of Soul are celebrating the season with a very special holiday single. “Merry Christmas (I Don’t Want To Fight Tonight),” is out today, Friday, December 15th, at all digital music retailers and streaming services here.

“Merry Christmas (I Don’t Want To Fight Tonight)” sees Little Steven and the Disciples of Soul bringing their one-of-a-kind sound to The Ramones’ Yuletide classic, written by Joey Ramone and first found on the B-side to the 1987 single, “I Wanna Live.” The new rendition – arranged and produced by Stevie Van Zandt – was recorded by Little Steven and the Disciples of Soul two weeks ago during soundcheck in Utrecht, Netherlands in the midst of their extraordinary “Soulfire Tour 2017,” capturing all the spirit and energy of the 15-piece rock ‘n’ soul revue at the very peak of their formidable onstage power.

“This is our tribute to the Ramones, keeping their music alive,” Van Zandt told Rolling Stone. “I needed a third verse so I channeled Joey and wrote what I feel is the third verse he would have written. His brother Mickey heard the record and gave me his blessing.”

The “Soulfire Tour 2017” of course marked the acclaimed release of Little Steven’s sensational new solo album, SOULFIRE, available now via Wicked Cool/Big Machine/UMe. The album is available as CD, digital download, and 180-gram black vinyl, the latter presented as a double LP housed in a gatefold sleeve with the music on Sides 1-3 and a unique etching of Little Steven on Side 4.

SOULFIRE has quickly drawn rapturous applause from fans and critics alike, with Rolling Stone declaring, “Rock’s ultimate sideman reclaims the Jersey Shore sound he helped invent.” “Cynicism, irony and cultivated hip detachment have taken their toll on rock ‘n’ roll,” raved USA Today. “With SOULFIRE, Van Zandt aims to blow all that out and lead listeners back to its more passionate essence.” “It’s hard to imagine a more joyous and revelatory contemporary blue-eyed soul recording,” enthused American Songwriter. “The appropriately titled SOULFIRE is a tough, tight and clearly inspired project as well as a most welcome return from the musical shadows for Steven Van Zandt.” SOULFIRE “hearkens back to Van Zandt’s classic first solo album of gritty, greasy, horn-accented ’60s-style rock and soul,” noted Billboard, while Paste proclaimed, “Rockier than Motown or the Sound of Philadelphia, this a joyous invitation to live and love.”

SOULFIRE was arranged and produced by Van Zandt at his own Renegade Studios in New York City, co-produced and recorded by GRAMMY® Award-winner Geoff Sanoff (Fountains of Wayne, Stephen Colbert) and co-produced and music directed by guitarist Marc Ribler. The album was mixed and mastered by Van Zandt’s career-long collaborators and friends Bob Clearmountain (Rolling Stones, David Bowie, The Who, Bryan Adams), and Bob Ludwig (Led Zeppelin, Nirvana, The Band, Sly and the Family Stone).

Little Steven Van Zandt is of course known around the world for his utterly personal songwriting and an ambitious adventurousness that has fueled much of his creative output these past two decades. In addition to his ongoing role as a touring and recording member of The E Street Band, he has also expanded his artistic parameters to include landmark work as an actor on The Sopranos and Lilyhammer as well as host, historian, and rock ‘n’ roll advocate on Sirius XM’s one-and-only “Little Steven’s Underground Garage” (not to mention creator of Sirius XM’s long-running “Outlaw Country” format). Van Zandt has also expanded his musical boundaries to include composing the score for all three seasons of Lilyhammer and additional work as producer and songwriter, lending his distinctive craft to records from an array of international garage rockers.

Little Steven and The Disciples of Soul made their long-awaited live return last October at London’s BluesFest 2016. Van Zandt and the band also crossed the Atlantic this fall for a hugely successful European leg of the “Soulfire Tour 2017,” with multiple stops in England, Scotland, Germany, The Netherlands and Spain, highlighted by Paul McCartney sitting in to perform “I Saw Her Standing There” in London, and then the band performing a lunchtime show at Liverpool’s Cavern Club.