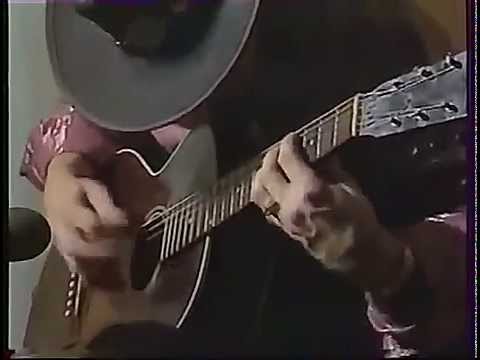 Vaughan owned and used a variety of guitars during his career. His guitar of choice, and the instrument that he became most associated with, was the Fender Stratocaster, his favorite being a 1963 body, with a 1962 neck, and pickups dated from 1959. This is why Vaughan usually referred to his Stratocaster as a, “1959 Strat.” He explained why he favored this guitar in a 1983 interview: “I like the strength of its sound. Any guitar I play has got to be pretty versatile. It’s got a big, strong tone and it’ll take anything I do to it.”

But he’s rarely been filmed playing with an acoustic guitar. Vaughan used a Gibson Johnny Smith to record “Stang’s Swang”, and a Guild 12-string acoustic for his performance on MTV Unplugged in January 1990, as seen below. On June 24, 2004, one of Vaughan’s Stratocasters, the aforementioned “Lenny” strat, was sold at an auction to benefit Eric Clapton’s Crossroads Centre in Antigua; the instrument was bought by Guitar Center for $623,500.