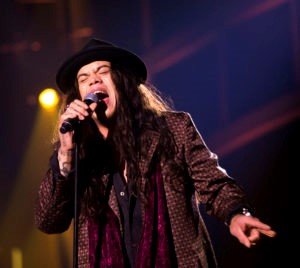 One song can change everything! History was made tonight on the worldwide series premiere of CTV’s THE LAUNCH as folk/blues/soul artist Logan Staats from Ohsweken, Six Nations of the Grand River reserve in Ontario became the first-ever artist chosen to record a new, original single. “The Lucky Ones” was released across the country immediately following tonight’s broadcast – and is launching immediately on radio stations across the country. The single is also available to buy and stream everywhere, including iHeartRadio, Apple Music, iTunes, Spotify, and Google Play.

Unanimously mesmerized and moved by Staats’ staggering, soulful talent, mentors Shania Twain, producer/songwriter busbee, and music mogul Scott Borchetta ultimately chose to launch Staats’ music career with his poignant and poetic rendition of “The Lucky Ones” on THE LAUNCH.

“To work with these incredibly gifted mentors and to learn from them is a once-in-a-lifetime experience for which I’m so incredibly grateful,” said Logan Staats. “To be given the amazing chance to breathe life into the beautiful words and melody that is “The Lucky Ones” is an unbelievable honour that just feels so right and so natural. Tonight – I’m the lucky one!”

“Launching Logan and “The Lucky Ones” tonight reinforces the premise of this show: it all starts with a great song,” said Borchetta. “busbee delivered a song with amazing potential. Pairing that great song with the right artist creates a perfect storm – and Logan’s haunting, powerful voice and sheer talent bring this song to life so beautifully. We are proud to launch this song right now!”

Following a nail-biting audition process before the celebrity mentors, Logan and Vivian emerged as the two breakthrough artists chosen to perform and make the original song “The Lucky Ones” their own.

After a nerve-wracking 48 hours in studio rehearsals, recordings, and working closely with the episode’s celebrity mentors, Logan and Vivian took the stage in front of a live studio audience to perform their unique interpretations of “The Lucky Ones”.

Both aspiring artists dazzled the mentors with spectacular performances, but after intense deliberations, Logan was ultimately chosen for the opportunity of a lifetime – to have his soulful version of the song “The Lucky Ones” launched across Canada and to the world via THE LAUNCH’s expansive slate of top music partners.

Additionally, Bell Media is poised to throw the full weight of its marketing, promotional, and publicity support behind Logan and his song across its national footprint of broadcast and digital entertainment properties.

“The Lucky Ones” is written and produced by busbee in association with Bleta Rexha, Maureen “MoZella” McDonald, Justin Franks, and Casper & B. Label: Big Machine Canada and Universal Music Canada. Executive Producers are Scott Borchetta and Randy Lennox.

Born in Ohsweken on the Six Nations Of The Grand River reserve and raised in the town of Brantford, Ont., Logan Staats started writing and performing music in his early teens and would later go on to become an accomplished award-winning artist. His haunting and distinct voice has provided opportunities to share the stage with acts such as Buffy Sainte-Marie, Keith Secola, Mumford and Sons, and more. A product of passion, compulsion, and tireless musical commitment, Logan’s songs are truly his own. Armed with his guitar and harmonica, he has transitioned from running the weekend bar circuit to playing sold out venues in his hometown and beyond. His performances are animated by a level of self-possession, sadness, and joy created by an aura of inevitability. Logan is hell bent on raising the bar for Indigenous/mainstream crossover music. Ingrained with the mentality that anything is possible when you put your heart and soul into it, Logan is well on his way to further accomplishing greatness.