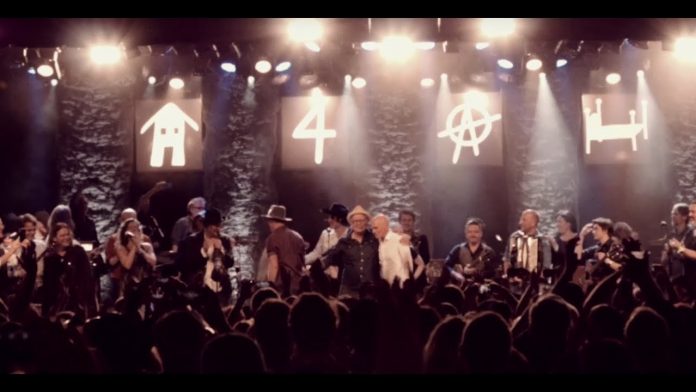 Sing in the shower? Most everyone does it.

Now… Record a track in the men’s room with nearly 50 of Canada’s most celebrated musicians? That is definitely one for the history books.

And history they made as Alan Doyle, Jim Cuddy, Sarah McLachlan, Ed Robertson, Colin James, Barney Bentall and many more of Canada’s top musicians came together to cover Spirit of the West’s “Home for a Rest” in honour and support of frontman John Mann and his battle with early-onset Alzheimer’s.

Performing and recording as part of a benefit in John’s honour at the Commodore Ballroom in November 2017, the resulting video and song sit at the helm of a GoFundMe campaign to assist the 55-year-old singer in his extensive care for the devastating degenerative disease. 100% of the proceeds from the sales and streaming of the new release will go to the John Mann Trust Fund. And that includes their distributor, IDLA and myself handling the publicity.

“This song is a testament to the love that lives in the community of the Canadian Music Business,” shares Alan Doyle, who spearheaded the recording. “I encourage everyone to enjoy and share this song that was made by so many people offering a hand to a friend who needs it.

“We did drape it nicely,” Doyle told CBC. “We found a bunch of black drapes to put over the urinals and the like. We had Sarah McLachlan coming in there. I couldn’t ask Sarah to go to just any old men’s can to sing a song.

Having raised more than $33,000 so far, the response has been a heartfelt, impassioned tribute to the Canadian musical icon.

“SOTW makes me smile and dance,” shared one GoFundMe contributor, Reta Moerike. “Thank you for the joy of this video. Wishing John, his family and friends peace.”

“There aren’t enough words to say thank you, John and SOTW, for sharing your gifts with us and for being living examples of integrity, kindness and love in the face of this disease,” added Deborah Seabrook with her contribution. “My world, and the world, are better places because you and your music are in them.”

Industry peers beyond musicians are lending their support as well.

“My very first gig as a lighting designer was Spirit of the West at the Empress six years ago,” shares Kyle Gilmar. “Thanks for letting the new guy have a shot.”

The special recording of “Home For A Rest” was performed by: Jim Cuddy of Blue Rodeo, Sarah McLachlan, Alan Doyle, Ed Robertson of Barenaked Ladies, Spirit Kids Barney and Dustin Bentall, Colin James, Craig Northey and The Odds, Shari Ulrich, Jim Byrnes, Kendel Carson, Daniel Lapp, Spirit of the West with Cory Tetford, Shehab Illyas and Kris MacFarlane. Thanks to Shehab Illyas for compiling the footage to create the video to accompany the song, and to the kind folks below for sharing what they captured at the show: Christine Lovely, Darlene Dobson, Shaun Ledding, Lynda Elstad , and Terry David Mulligan.

Donate or share to support the care of John Mann here.