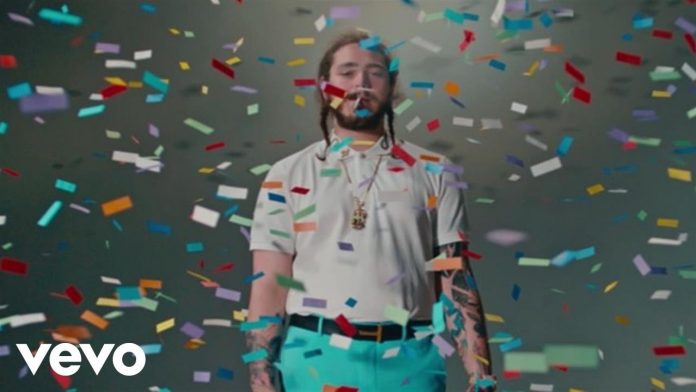 Today, multi-platinum artist Post Malone announced his upcoming North American tour with special guest SOB X RBE. The outing will kick off April 26 in Portland, OR and make stops in 28 cities across North America including Seattle, Nashville, Toronto, Atlanta, Austin, and more. The tour will wrap in San Francisco, CA on June 24.

Every pair of online tickets purchased comes with one physical copy of Post Malone’s forthcoming album, Beerbongs & Bentleys. Ticket purchasers will receive an additional email with instructions on how to redeem their album and will be notified at a later date on when they can expect to receive their CD. (U.S. and Canadian residents only.)

Post Malone stirs a mix of genres into his own sonic sound that’s both intoxicating and invigorating on his RIAA double-platinum certified full-length debut album, Stoney. His uncanny ability to cook up a 21st century “sauce” of genres transformed the multiplatinum Dallas, TX maverick into the “#1 Debut Hip-Hop Artist of 2016.” Upon release, Stoney bowed at #1 on the iTunes Overall Top Albums Chart and Top 10 on the Billboard Top 200. In just a few months, the debut album has accumulated over 4 billion streams globally. Setting the pace for alternative 21st century Hip-Hop, Stoney’s unbeatable and unbreakable streak of smashes includes the breakout “White Iverson” (5x-platinum), his first Hot 100 Top 10 entry “Congratulations” [feat. Quavo] (6x-platinum), “Go Flex” (2x-platinum), “Too Young” (Platinum), “I Fall Apart” (Platinum), and “Déjà vu” [feat. Justin Bieber] (Platinum). Moreover, the multiplatinum Dallas maverick completed the “longest climb ever to #1 on the Top R&B/Hip-Hop Albums Chart” in history, breaking the previous record set in 1989, and topping the chart in its 51st week of release being named “the #3 Overall Streaming Album of 2017.”

Produced by Louis Bell and Post Malone, the song arrives hot on the heels of the record-breaking, triple-platinum, mega-smash hit “rockstar,” featuring tour mate 21 Savage. It’s the next anthem to be unveiled from his forthcoming, second full-length album and what promises to be the biggest musical event of 2018, Beerbongs & Bentleys—out soon.

With the entire West Coast riding for them SOB x RBE emerged onto the national hip hop radar in 2017, earning praise from publications like XXL who described their self-titled mixtape as “one of the best tapes of the year” and proclaimed that “SOB x RBE is the hardest rising crew in rap right now, bar none, and they’ve been on fire this year”. Meanwhile, Complex said the crew is “dominating the West Coast” and “making major noise in 2017” while the publication also featured “Anti” on their ‘Bout To Blow’ list.

Now, with their debut album Gangin due out February 23rd and “Paramedic!”, their recent collaboration with Kendrick Lamar on Marvel’s Black Panther soundtrack, the group are proving that the early accolades are only the beginning of a long career.