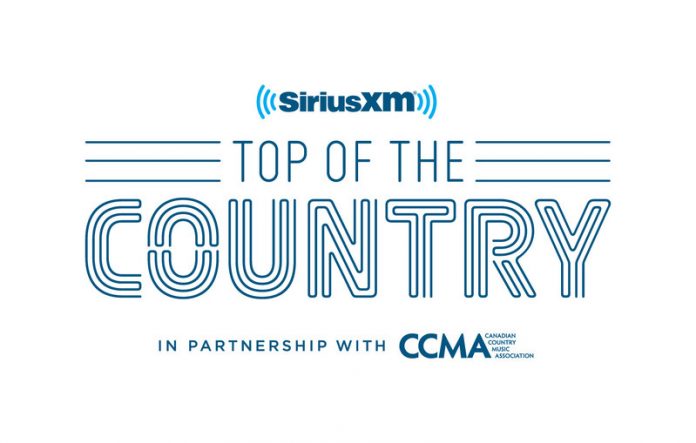 SiriusXM Canada, the country’s leading audio entertainment company, today announced the launch of SiriusXM’s Top of the Country in partnership with the Canadian Country Music Association (CCMA), offering a national platform exclusively for emerging Canadian country artists. The cross-Canada search will give participating acts a chance to play at Canada’s biggest country music festivals, industry mentorship programs, a SOCAN songwriting camp in Nashville, TN and more, plus the grand prize of $25,000 and a SOCAN songwriting camp in Pender Island, BC.

Once participants representing Western, Central and Eastern Canada have been selected, the competition will not only offer emerging artists some of the biggest prizes in the country, but showcase them on a national stage through a public online vote open to all Canadians to choose their favourites.

“Fostering and promoting new Canadian talent has always been incredibly important to SiriusXM and to our partner, the CCMA,” said Jeff Leake, Director of Music Programming. “So as Canada’s premier music provider, we wanted to shine a light on the burgeoning community of up and coming country artists to give them the exposure they deserve and need to help take their music careers to the next level.”

“As a champion of Canadian country music, the CCMA prides itself on finding new ways to elevate the genre and the artists that are navigating their way through it,” said Tracy Martin, Interim President of the CCMA. “We were focused on expanding our Discovery Program and our new artist development efforts, and we have done just that with our partner, SiriusXM. We are very excited to launch Top of the Country.”

SiriusXM invites Canadian country solo artists and groups to register starting at 10 am ET today at siriusxm.ca/topcountry until midnight ET on March 2. Following the registration phase, three artists from each of Western, Central and Eastern Canada will be chosen by a jury of industry experts to record in-studio videos for the Canada-wide online vote, taking place later this Spring.

Once voting is complete, three will emerge as the Top Country Finalists, receiving a stage spot at Big Valley Jamboree (Camrose, AB), Cavendish Beach Music Festival (Cavendish, PEI) or a SiriusXM-sponsored major festival in Ontario. Finalists will also receive a SOCAN songwriting camp in Nashville, TN and an exclusive mentoring session with Canadian artists and industry professionals in Toronto, hosted by SiriusXM and the CCMA.

The grand prize winner of Top of the Country will be chosen during the CCMA’s Country Music Week in Hamilton, ON this September. Finalists will battle it out on stage before a headlining artist at the SiriusXM CCMA Top of the Country Finale, airing live on SiriusXM, with music industry professionals and audience votes deciding the winner of $25,000, plus a SOCAN songwriting camp in Pender Island, BC.

SiriusXM’s Top of the Country in partnership with CCMA is part of SiriusXM’s ongoing tradition of promoting and elevating the best emerging Canadian music. SiriusXM continues to offer a leading platform for Canadian artists through its significant financial contributions and North American-wide reach of over 35 million subscribers.