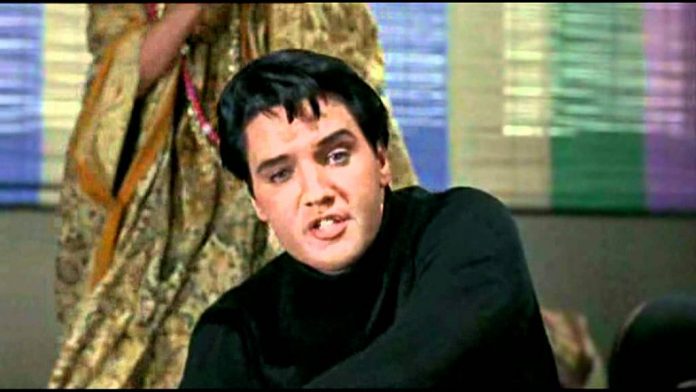 In 1964, Elvis Presley’s hairdresser, Larry Geller, introduced him to the teachings of Paramahansa Yogananda. 3 years later, Elvis performs “Yoga Is As Yoga Does” in Easy Come, Easy Go. This was not an accident, a gentle and deep yearning to expand yogas’s audience to the teen set, but the film – Elvis plays a frogman working for the U.S. Navy dives for buried treasure – wasn’t taken seriously as the two would have liked. According to Peter Guralnick’s Elvis biography:

The inclusion of the musical number “Yoga Is As Yoga Does,” which Elvis performed as a duet in Easy Come, Easy Go, was no accident, Larry felt, but intended, rather, as a direct insult to Elvis’ (and Larry’s) beliefs — but Elvis went ahead and recorded it anyway. Only after the scene in which it was included was shot did Elvis finally react. It was then, in Larry’s account, that Elvis “stormed into the trailer, shouting, ‘That son of a bitch! He knows, and he did it! He told those damn writers what to do, and he’s making me do this.’”