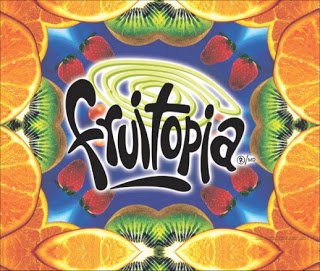 Fruitopia was a pet project of Coke’s former marketing chief, Sergio Zyman. It was a fruit-flavoured drink introduced by the Coca-Cola Company in 1994 and targeted at teens and young adults, and was invented as part of a push by Coca-Cola to capitalize on the success of Snapple and other flavored tea drinks.

Today I found out Fruitopia had rather unusual commercials despite the simplicity of the product behind them. Along with being inspired by the 1960s feel of hippydom and free spirituality, the background music on several of the ads was provided by Kate Bush.

When Kate Bush took the assignment to do the music for Coca-Cola’s Fruitopia ads, it was indeed free rein for her. Chiat/Day, New York, creative director Marty Cooke and executive producer Andrew Chinich were overjoyed when Bush agreed to do not only one, but all nine of the spots in the Fruitopia campaign. Perhaps the fact that they told her she could do anything she wanted with the scores had something to do with it. In any case, Cooke and Chinich were just glad to get Bush on the job, which she did from London with a bunch of hand-picked musicians. “She said she was interested in providing a lot of variety, from Japanese drummers to Moroccan music… and she came through in spades,” Cooke says.