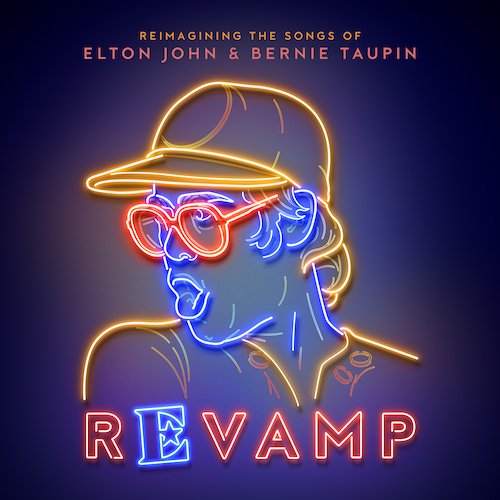 “’It’s always a huge compliment when an artist loves your song enough to take the time and effort to rework it,” says Elton. “As songwriters, Bernie and myself are thrilled when singers we admire and respect as much as those on Revamp choose to add their own unique twist in the process. It means that our music is still relevant and ultimately that our songs continue to reach new audiences. We’re humbled and thank them all for their generosity.”

The calibre of names contributing to Revamp is another reminder of Elton’s enduring popularity at a typically busy and prolific time for the superstar. Last month he announced his Farewell Yellow Brick Road tour, which marks the finale of 50 years on the road. Comprising of over 300 dates across five continents over three years, the tour kicks off in September with five stops in Canada, including 2 shows in Toronto at the Air Canada Centre on September 25 & 26. The first 60 dates sold out immediately after going on general sale, confirming that the farewell tour will be some of, if not the, hottest gig tickets of the next three years. Full list of Canadian tour dates below, and additional tour information available at eltonjohn.com/tours.

Revamp arrives as follow up to Elton’s ultimate greatest hits album Diamonds, released in November of 2017. Coinciding with his 70th birthday and the 50th anniversary of his phenomenal songwriting partnership with Bernie Taupin, the album prompted a flurry of celebratory activity and was certified twice Gold in the UK, reaching the top 5 of the UK album chart upon its release.

Elton’s influence on the worlds of fashion and film also continues to burn as brightly as ever. Last year Gucci unveiled their Spring Summer 2018 collection designed by Alessandro Michele and inspired by Elton’s inimitable style, referencing original items taken from the style icon’s archives. Elton also appeared as himself in a critically lauded, hilariously tongue-in-cheek role in the motion picture, “Kingsman: The Golden Circle”, and his songs soundtrack the forthcoming “Sherlock Gnomes”. Last year also saw Elton and Taupin launch “The Cut”, a project allowing undiscovered creative talent from all over the world the chance to create the official music videos for some of their most iconic songs: “Rocket Man”, “Tiny Dancer” and “Bennie And The Jets”, each winning video attracting millions upon millions of Youtube views.

Revamp stands as yet another timely reminder of John and Taupin’s influence on the next generation of global stars at a time when their music continues to fill stadiums, sell albums and influence fashion. John stands alone as a true great, whose music still garners such admiration from a truly broad range of global stars. The release of Revamp will also be accompanied by a Nashville influenced album Restoration, slated to release on the same date, April 6, featuring John’s songs reinterpreted by the biggest in Country music, including Rosanne Cash, Emmylou Harris, Miley Cyrus and Willie Nelson.