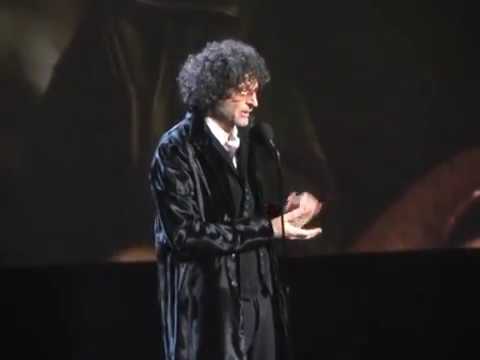 It’s been a bit of a running joke on the Howard Stern Show on SiriusXM that when Jon Bon Jovi asked him to induct the band into the Rock and Roll Hall of Fame, Howard said yes, not knowing it wouldn’t be in New York, but in Cleveland. Watch Howard’s speech as he tells the story of how he met the band, and why the group deserves its rightful place in the hall of greatness.

In 1987, I was on a date with Richie Sambora. We met the hottest chick and had a threesome. That’s how close we get. Thank you! Y’know, I know exactly what you’re saying, it sure looks like hell has frozen over. The man who never leaves home, me, Howard Stern. Now, on the other side of the zombie apocalypse, Jann Wenner finally let Bon Jovi into the Rock and Roll Hall of Fame. Way to go Jan, Jonny, John, Jann, whatever the fuck your name is. Anyway, Jann, you did it. You finally gave this fantastic band their due. Now, for those of you who don’t know, Jann is the man in charge, but I’m not sure why. This guy doesn’t play a musical instrument, he doesn’t have a band, but he did start a great magazine, Rolling Stone. Yeah. And now it’s the size of a pamphlet, what a business plan, way to go. I read it in about 30 seconds backstage. Now, Jann required years of pondering to decide if this glorious band that sold over 130 million albums could be inducted. What a tough decision! “Gee, I don’t know if I should let Bon Jovi in? 130 million albums, that’s not such a big deal.”

Let me give you an idea of what the number 130 million means, and it means a lot. Now, the bubonic plague only killed 50 million people. The atom bomb only killed 225,000 people. Six-hundred-and-twenty-five–thousand people died in the Civil War. Peanuts compared to 130 million. Anybody wanna hear about the AIDS epidemic or …? But you see, even with all this talk of death and destruction, I’m making a point, and my point is that 130 million is ridiculously big. Try to look at it this way: the average amount of sperm in one ejaculation is only 100 million. Bon Jovi beat sperm, ladies and gentlemen! Now, speaking of sperm, the band Creed sold 35 million records, Blondie sold 40 million records, and these guys got into the Hall of Fame, and they didn’t have to wait. Jann knew what to do. Let me tell you something. Leonard Cohen used to sit at home beating off at night thinking about selling 3 million albums, let alone 130 million.

Now, I’ve only just started. Bon Jovi. These guys deserve it. They are finally getting their dues. It’s about time. I gotta say. The Rock and Roll Hall of Fame: the only place you can see Slim Whitman’s underpants, Mariah Carey’s tampon and what about that Ike Turner boxing gloves in the glass case. What a glorious collection of junk we have around here.

It’s an honor to be here tonight, ladies and gentlemen. I’ve known them since they’ve started, and aside from the incredible music accomplishments, they are some of the nicest men I ever met. So humble and gracious. Whenever I would see them over the years, even with multi-platinum success, they each had a smile on their face in a welcoming way. Appreciation for their craft and their fans. In addition to music, their charity work feeding the homeless and helping the American Red Cross.

First of all, we’ve got Jon Bon Jovi, a great frontman extraordinaire. Yes, the man who singlehandedly destroyed most of the ozone layer in the Eighties with Aqua Net hairspray. The masterful and powerful drums of Tico Torres. David Bryan, a true gentlemen on keyboard. Alec John Such, what a great bass player. And by the way, John Such, one of the best names in rock & roll. In fact, I’ve often said the band should’ve been called John Such, but we know his ego could not deal with that. Then of course, the extraordinary talents of their current bassist, the great Hugh McDonald.

And last but not least, my friend, Richie Sambora. One of the greatest guitar players in the world; masterful songwriter. And, you know this is true, the man with the biggest penis in Bon Jovi. There was a contest early on, Richie won, but I don’t wanna get into the anaconda penis discussion. This isn’t the right time for that. We’re going to be inducting Richie in the penis hall of fame next week. You realize that Mr. Richie Sambora singlehandedly considered it his mission to help women who could not get dates to feel better about themselves. Over the years, he helped women like Heather Locklear, Cher, Denise Richards. I always said it’s a good thing that Richie had a thing for pretty blondes with blue eyes and a nice ass. That’s what motivated him to team up with Jon in the first place.

Let’s get down to business. These boys have worked their asses off. They are cowboys on a steel horse they rode.

[Sings] “It’s all the same, only the names will change/Everyday, it seems we’re wastin’ away/Another place where the faces are so cold/I drive all night just to get back home/I’m a cowboy, on a steel horse I ride/I’m wanted (wanted) dead or alive/Wanted dead or alive …

“Sometimes I sleep/Sometimes it’s not for days/The people I meet/Always go their separate ways/Sometimes you tell the day/By the bottle that you drink/And times when you’re all alone all you do is think/I’m a cowboy, on a steel horse I ride/I’m wanted (wanted) dead or alive.”

Then Jon wrote a song called “Runaway.” “She’s a little runaway.” You know that song? Then got signed by a label, and he needed a band, so he teamed up with these great guys that we honor here tonight. And they played everywhere and they recorded music during the next couple of years. According to Richie Sambora, the band was virtually broke when they started recording the album 7800 Degrees Fahrenheit. They were living together in the same apartment in Philadelphia and sleeping on the floor when it was 12 degrees below zero outside. They only had Jon’s hair and Tico’s farts to keep them warm. The band was struggling, but they next released Slippery When Wet. Rapidly rose to the top of the Billboard charts and was the best-selling album of 1987.

Jon’s ferocity. “Don’t bore us, get to the chorus” worked like a charm. [Sings] “Shot through the heart and you’re to blame/Baby, you give love a band name. “Livin’ on a Prayer,” then “Wanted Dead or Alive” burned up the charts and the hits kept coming. “Raise Your Hands,” which is still an anthem at all their live shows today. “Bad Medicine,” “I’ll be there for you/These five words I swear to you.” “Lay Your Hands on Me,” “It’s my life/It’s now or never/I ain’t gonna live forever.” “Who Says You Can’t Go Home,” and on and on and on. Other bands from their era have disappeared, yet Bon Jovi continues and grows stronger. In fact, their last four tours have grossed almost a billion dollars.

If I can be emotional for a second, yes, rock & roll musicians, what they do are really important. To me, personally, I love most of the bands being inducted tonight. Bands like the Moody Blues. These guys comforted me through many lonely days in high school. Look at this face, you know I was lonely. But there was nothing better than putting on headphones and listening to Days of Future Passed. The Cars. Dire Straits. I played their music for years on the radio and I always considered it a great privilege to have a job where I can celebrate rock & roll and play the work of these fine musicians, so on behalf of all fans like me who depend on music to help us through our days, I say thank you, thank you, thank you from the bottom of my heart.

I really feel blessed to know you and to have been given this honor of inducting you. And, Jon, I’m glad you asked me to do this even though I kvetch about it. I’m just glad you don’t have to sit at home throwing darts at pictures of Jann Wenner anymore. It’s over. It’s over, Jonny. The dream has been realized. No, not the dream of owning a football team. That was ridiculous. Your wife, Dorothea, sweetest woman alive, she almost had a heart attack when she heard that the mansion in Jersey was being traded in for a condo in Buffalo, but I digress, I want to get back to rock & roll. Yes, the dream has been realized. The dream I’m talking about is that this great band of brothers are finally joining their fellow musicians in the Rock and Roll Hall of Fame. One hundred and thirty million fans can’t be wrong. You got to the chorus and we were never bored. I love these guys and so do you. It’s my honor to induct into the Rock and Roll Hall of Fame, Hugh McDonald, Tico Torres, Sir Alec John Such, David Bryan, Richie Sambora and the one and only, Jon Bon Jovi.