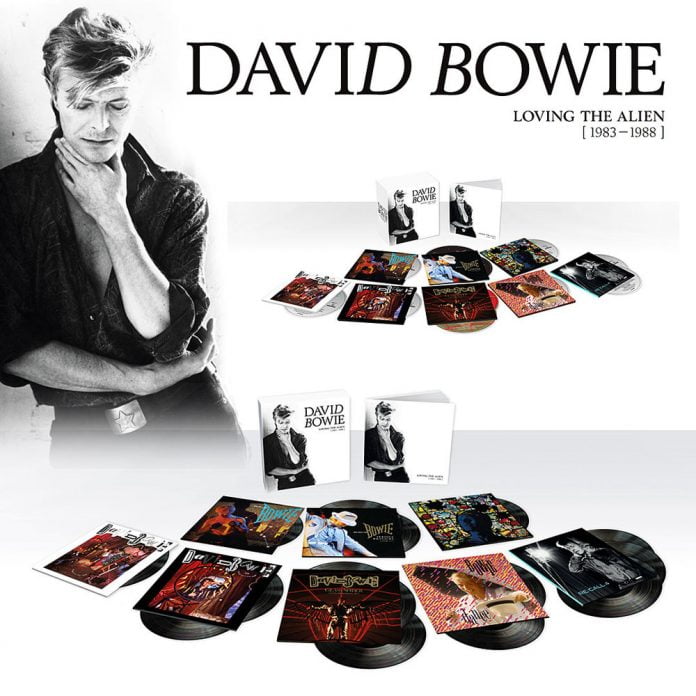 Parlophone Records are proud to announce DAVID BOWIE ‘LOVING THE ALIEN (1983 – 1988)’ the fourth in a series of box sets spanning his career from 1969.

DAVID BOWIE ‘LOVING THE ALIEN (1983 – 1988)’ will contain a brand new production of the 1987 album ‘NEVER LET ME DOWN’ by Bowie producer/engineer Mario McNulty with new instrumentation by Bowie collaborators Reeves Gabrels (guitar), David Torn (guitar), Sterling Campbell (drums), Tim Lefebvre (bass) as well as a string quartet with arrangements by Nico Muhly and a guest cameo by Laurie Anderson on ‘Shining Star (Makin’ My Love)’.

Exclusive to each of the box sets is ‘NEVER LET ME DOWN (2018)’, a new production of the 1987 album. The seeds of this reimagining of the album were first sown in 2008 when David asked Mario McNulty to remix the track ‘Time Will Crawl’ and record new drums by longtime Bowie drummer, Sterling Campbell, along with strings. The track was issued on the iSelect compilation to much acclaim, and in the notes, for that record, David remarked ‘Oh, to redo the rest of that album’.

Fast-forward to early 2018 McNulty entered Electric Lady Studios in New York with Sterling, Tim Lefebvre on bass, who was in the ★ (“Blackstar”) band and Reeves Gabrels and David Torn on guitars. All of the musicians had a history with David, so were a perfect fit for what now sound like brand new songs. Nico Muhly, whom Mario first met when they were both interns working for Philip Glass in 2001, has handled the string arrangements.

The re-workings have revealed ‘Never Let Me Down’ as a very strong collection of songs with a dark thematic thread running through them. Fans listening to ‘NEVER LET ME DOWN (2018)’ would be forgiven for thinking that they were listening to a brand new ‘lost’ Bowie record.

This 2018 version of the album will also feature newly ‘remixed’ artwork reflecting the album’s subject matter and features unseen images from the original cover photographic session from the archive of Greg Gorman.

Also in each box is the never before released ‘SERIOUS MOONLIGHT’ live album recorded in Vancouver, in 1983. Originally mixed at the time by Bob Clearmountain, the double album captures Bowie on what at that time was his most successful tour. The artwork features shots taken by photographer Denis O’Regan.

Also included is the 2CD / 3LP GLASS SPIDER (LIVE MONTREAL ’87) album, making its debut on vinyl (which is exclusive to the LP box). The tour’s innovative set and marriage of music and theatre has been cited as a big inspiration to acts in the 2000’s. Speaking in 1991 about Glass Spider Bowie said, “It was the first time I’d had the opportunity to spend that kind of money and do shows like that! The first time since Diamond Dogs, anyway…I thought, right! Let’s really spend some money! I had all these thwarted dreams of what I’d tried to do with rock ‘n roll in the early ’70s”.

Exclusive to each box is ‘RE:CALL 4’ and ‘DANCE’. The former a new compilation featuring remastered contemporary single versions, non-album singles, album edits, b-sides and songs featured on soundtracks such as Labyrinth, Absolute Beginners and When The Wind Blows. ‘DANCE’ features 12 contemporaneous remixes some of which are appearing on CD and vinyl for the first time and is named after an unreleased Bowie remix album that was originally slated for release in November 1985.

The physical box set’s accompanying book, 128 pages in the CD box and 84 in the vinyl set, will feature rarely seen and previously unpublished photos by photographers including Denis O’Regan, Greg Gorman, Herb Ritts and many others as well as historical press reviews and technical notes about the albums from producers/engineers Nile Rodgers, Hugh Padgham, Mario McNulty and Justin Shirley-Smith.

The CD box set will include faithfully reproduced mini-vinyl versions of the original albums, and the CDs will be gold coloured rather than the usual silver. The vinyl box set has the same content as the CD set and is pressed on audiophile quality 180g vinyl. As well as ‘Never Let Me Down (2018)’, ‘Dance’ and ‘Re:Call 4’, both ‘Serious Moonlight (Live ’83)’ and ‘Glass Spider (Live Montreal ’87)’