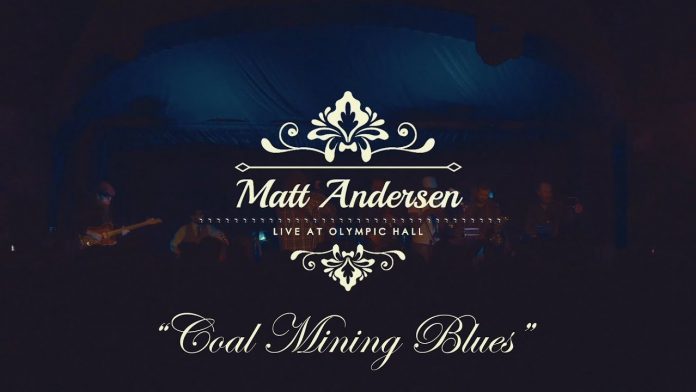 The song comes off Matt Andersen & The Mellotones’ Live At Olympic Hall, which was recorded on Nov 22, 2014 at Olympic Hall in Halifax, Nova Scotia in support of Andersen’s JUNO nominated record Weightless.

“I was fortunate enough to have The Mellotones on the road with me for a slew of shows,” Andersen told American Blues Scene. “Some of the best time’s I’ve had playing music. It was an absolute treat to share the stage with these guys, especially this night at Olympic Hall. I’m thrilled that we captured what was coming from those shows.”

From the first notes of “Weightless” to the slow-dying roar of the crowd as the last licks of “Devil’s Bride” squeal out, Matt Andersen and the Mellotones Live at Olympic Hall is a rollicking, sizzling night of Andersen’s thunderous voice and hot guitar playing mashed up with the ten-piece force of nature that is the Mellotones, all captured at a historic dance hall in downtown Halifax.

Andersen calls it “the most drastic thing I could do,” a far cry from his usual one guy, one guitar context. “I make an impact when I’m solo with the quiet parts more than the loud parts. With a band it’s the opposite.” And if you’re going to have a band, it should be the Mellotones. Long a staple of Halifax’s live music scene, the band features a smoking horn section along with keys, drums, and more. “I felt like a rock star,” Andersen says.