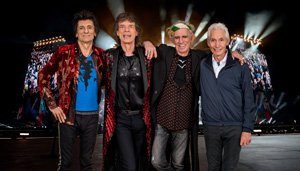 This multi-faceted partnership marks the beginning of a new era of expanded collaboration between The Rolling Stones and UMG.

Few bands in history have so profoundly impacted global culture as The Rolling Stones. Through their powerful music, infectious live performances, unique visual identity and attitude, the band is renowned throughout the world to audiences of all ages, widely influencing popular culture through art, fashion and film. With UMG, the band has a partner that complements and supports their global stature, with expertise and resources that enable the band to maximize their reach while underscoring their enduring cultural relevance across numerous forms of entertainment.

As part of the agreement, UMG extends its position as the home for The Rolling Stones’ iconic catalogue, which includes some of the most celebrated and influential albums of all time, from Sticky Fingers through to 2016’s Grammy award-winning Blue & Lonesome. UMG will continue to distribute the band’s celebrated recorded music catalogue globally with future projects and reissues to be released through UMG’s labels and networks around the world.

Bravado, UMG’s brand-management and merchandise company and the leading global provider of consumer, lifestyle and branding services to recording artists, will handle global merchandising rights, retail licensing, brand management and e-commerce on behalf of the band, including their iconic tongue logo, one of the most universally recognized symbols in entertainment.

At the same time, Bravado will continue working closely with the band and management to identify new and innovative opportunities for creative collaboration within the worlds of art, fashion, retail, sport, lifestyle and touring merchandise to excite and inspire their millions of fans around the world. Recent programs and collections include partnerships with Paris Saint Germain FC, Selfridges, Colette and Zara and newly designed merchandise for their No Filter European Tour.

In addition, UMG will provide The Rolling Stones with archival support and dedicated space for the band’s physical media assets, musical instruments and equipment across the company’s ecosystem of vaults positioned around the world.

Universal Music Group has been home to the Rolling Stones since 2008, and with this extended agreement sees UMG leverage the company’s global network of industry leading businesses spanning more than 60 countries to support the multimedia creative output of one of music’s most iconic and influential artists.