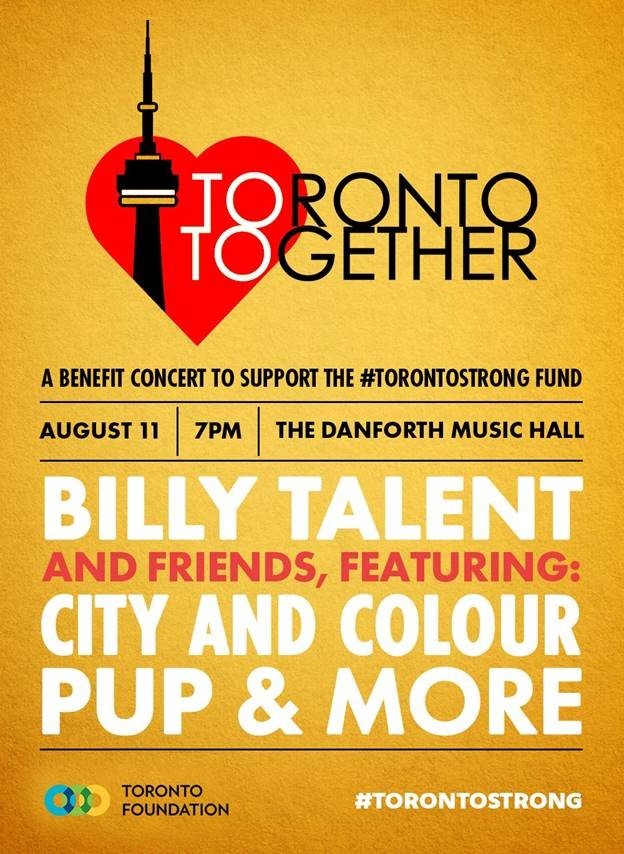 Toronto’s Billy Talent have announced that they will be hosting a benefit concert for the victims of the tragic shooting on Danforth Avenue. The Billy Talent and Friends TOronto TOgether concert will see special appearances from City and Colour and PUP and others. All proceeds from the concert will be donated to support the victims of this shooting via the #TORONTOSTRONG / Toronto Foundation. In an effort to support the local community that has been devastated by these events, the concert will be held at The Danforth Music Hall on August 11, during the Taste of the Danforth festival. Those who want to attend the event can get tickets here beginning Wednesday, August 1st at 10:00 AM EST.

In a statement announcing this benefit the band wrote:

We write this with a broken heart. What has happened in Toronto this summer and with what happened on the Danforth a few blocks from our studio, has not only hit close to home, this HAS hit home. All we know is that we can’t just sit here. We don’t know what we want but we want to do something. We want to throw a concert to show the world and more importantly our community that Toronto is a place of love, of community, of kindness and compassion. The violence that has happened here this summer does not represent the majority. This city is one of the best places in the world and we have to stand up and band together. Let’s raise money for the victims and their families. Let’s get the artists and people of the city to stand together. While none of us have all the answers we feel we need to make a start. We need to help, but let’s fucking do something TOGETHER. Let’s get the powers that be TOGETHER. Let’s do something special for our city and all the amazing people that live here and deserve to be celebrated.

Since their inception 25 years ago, giving back to their community has always been important to Billy Talent, who recently founded their own charity trust. The Billy Talent Charity Trust is administered by the band’s drummer Aaron Solowoniuk, and was created as a vehicle for Billy Talent and their fans to raise funds and awareness for various charities helping youth.