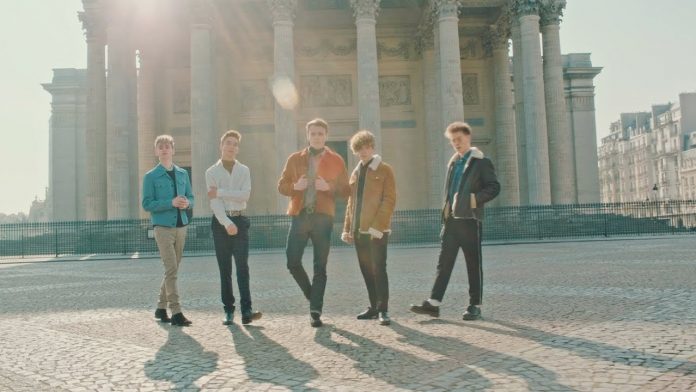 Why Don’t We has announced the release of their much anticipated, full length debut album. 8 LETTERS arrives at all digital music retailers and streaming services on Friday, August 31st.

8 LETTERS is heralded by today’s release of the album’s title track, available now for streaming and download HERE. Produced by GRAMMY® Award-winners The Monsters & Strangerz (Zedd/Maren Morris, Nick Jonas) with additional production by Jonny Price (Keith Urban, Kesha), “8 Letters” will be joined by a new companion visual, currently in post-production.

Produced by Louis Schoorl (5 Seconds of Summer), “Talk,” which shot to #1 on iTunes’ Overall Songs chart ahead of artists including Drake, was greeted with an array of online love, with MTV TRL raving, “this song has all the love and catchiness I love in a boy band song.” “Why Don’t We released another single of their upcoming album,” declared Hollywood Life, and there’s only one word to describe how fans (including us!) are feeling about it: SHOOKETH.”

“Hooked” – produced by Jacob Manson (Craig David, Rudimental Feat. Ed Sheeran) – was equally applauded, including an unadulterated rave in TIME, which wrote, “Why Don’t We continue to churn out the undeniable earworms…. The five boys have a knack for putting out songs that hit that perfect teen pop sweet spot: stuck in your head on the first listen, easy to sing along with and peppered with some smart production flourishes. It’s musical escapism that’s especially apt for a summer fling, no matter your age.”

Why Don’t We will introduce fans to 8 LETTERS with a series of high profile TV performances, including a special Labor Day concert in New York City’s Rockefeller Plaza for NBC’s TODAY, set for Monday, September 3rd. The band will then visit the nationally syndicated Live with Kelly and Ryan for an additional live performance, scheduled for Thursday, September 6th (check local listings).

Why Don’t We will further celebrate 8 LETTERS with a truly epic live schedule, including a major North American headline tour to be announced soon. Meanwhile, the band is about to embark on an eagerly anticipated tour of Asia, with shows set throughout the month in Thailand, Singapore, South Korea, Japan, China, Taiwan, and the Philippines. October will then see Why Don’t We crossing the Atlantic for their biggest European tour thus far, with stops scheduled for Spain, France, Ireland, the Netherlands, Germany, and the United Kingdom, culminating in an October 25th finale at London’s famed Eventim Apollo Hammersmith.

Amassing more than 200 million global audio streams, 3 million Instagram followers, and total YouTube views exceeding 200 million with over 2 million subscribers in just over a year, Why Don’t We has become one of pop music’s biggest breakout stories. Taking an innovative and unconventional approach towards releasing new music and actively engaging their rapidly growing fanbase, the prolific young group – the quintet ranges in age from 16-19 years old – put out four EPs in under 12 months. Following their debut “ONLY THE BEGINNING” and follow-up “SOMETHING DIFFERENT” EPs, it was last summer’s “WHY DON’T WE JUST” EP that truly exploded, hitting #1 on iTunes’ “Pop Albums” chart while overtaking artists like Bruno Mars, Harry Styles, and Ed Sheeran. After selling out their first-ever headlining summer tour, the band put out their “INVITATION” EP – released in September 2017 to commemorate the band’s one year anniversary – which proved an even greater success, topping iTunes’ “Overall Albums” chart in six countries including the United States. The band’s single “These Girls” made a top 10 debut on the iTunes Store’s “Top Pop Songs” chart late last summer, with the companion video now boasting over 51 million views at YouTube alone. The group closed 2017 on a high note, performing on the entire iHeartRadio Jingle Ball Tour, including the NYC stop at Madison Square Garden where they shared the stage with Taylor Swift, Ed Sheeran, Camilla Cabello and more.

Widely hailed as an electrifying live act, Why Don’t We has spent much of the past two years on tour around the world, including the recent “Invitation Tour,” which saw the entire North American leg sold out, including multiple nights in LA, Chicago, Toronto, and New York City. The band recently wrapped their biggest European headline tour to date, followed by show-stopping appearances at a slate of summer radio shows here in the U.S.