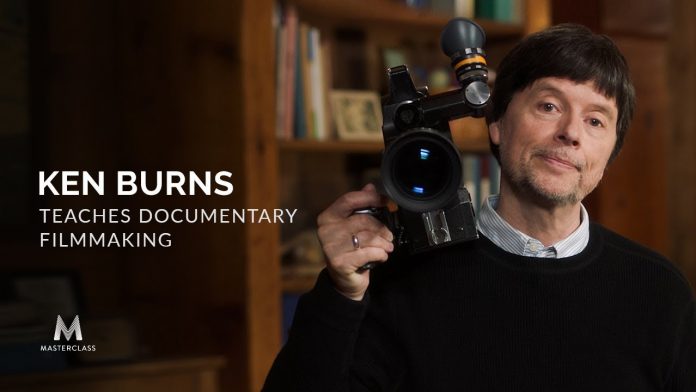 MasterClass, the online education company that enables anyone to learn from the best in the world, announced today that Ken Burns—one of the most influential and prolific documentary filmmakers of our time—is offering his first-ever online class exclusively through its platform. Burns’s class on documentary filmmaking is now available for pre-enrollment at www.masterclass.com/kb. Enrollment for the class is $90 for lifetime access, or $180 for an annual All-Access Pass subscription, which grants unlimited access to all new and existing classes.

Ken Burns is arguably America’s most celebrated filmmaker of historical documentaries with more than 40 years of masterful storytelling. Since the Academy Award nominated Brooklyn Bridge in 1981, Burns has gone on to direct and produce some of the most acclaimed documentaries ever made, including The Civil War; Baseball; Jazz; The Statue of Liberty; The War; The National Parks: America’s Best Idea; The Roosevelts: An Intimate History; Jackie Robinson; Defying the Nazis: The Sharps’ War; and The Vietnam War, which has been seen by over 39 million people. His work has garnered numerous awards including 15 Emmy Awards, two Grammy Awards, and two Oscar nominations; and in 2008, Burns was honored by the Academy of Television Arts & Sciences with a Lifetime Achievement Award. His newest film, The Mayo Clinic: Faith – Hope – Science, will air nationally on PBS on September 25, 2018.

“I realized very early on that the laws of storytelling also applied to documentaries,” said Burns. “A documentary can be didactic, educational and politically advocating, but it could also just tell a story that is as dramatic and captivating as fictional feature film. Then you’ve got the possibility of moving people at that same level, and you have the added advantage of it being true. In my MasterClass, I explore the ways in which I strive to bring the same expositional tools of a feature film to documentary filmmaking along with many more lessons on how to master the art of storytelling in a way that activates your audience’s imagination.”

In his MasterClass, Burns will teach students how to uncover and highlight the natural “drama of truth,” and he will demonstrate how documentaries can match, and even exceed, the depth of fictional narrative.  Burns will deconstruct scenes from some of his most notable works to explain how he finds the “human story” in true events, and he’ll share the filmmaking techniques he utilizes to “wake the dead.” His class will embolden students to tell stories that interweave deep and difficult themes of the American experience—race, gender, power, politics and war—and teach them how to distill vast research into compelling narratives that embrace complex truths and multiple points of view. While millions of viewers have seen the final version of Burns’s The Vietnam War, students in his MasterClass will have the rare opportunity to access early rough cuts of the film as Burns walks them through the process of sculpting the story in the edit. While Burns is recognized for his mastery of documentary filmmaking, storytellers from all disciplines will learn from his nuanced approach to crafting a story.

MasterClass provides educational, inspiring, and engaging classes taught by the world’s greatest minds in photography, cooking, film, writing, acting, music, sports, journalism, and more. With more than 35 classes that dive into philosophies, processes and techniques, MasterClass helps students progress more rapidly towards their own mastery. It offers a unique learning experience, including video lessons, interactive exercises, course materials, peer interaction, and more. All classes are available online as part of an annual subscription, or for individual purchase, at www.masterclass.com; or via the MasterClass app for iPhone and iPad, available for free download on App Store at: http://m.onelink.me/7a2592d8.