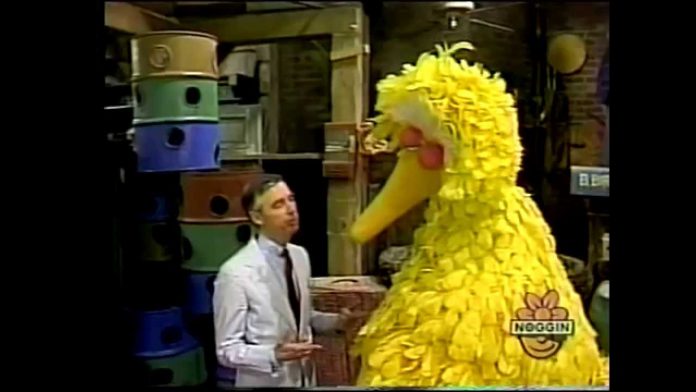 On the 1981 season finale of Sesame Street, Big Bird announces to everyone at Hooper’s that he’s preparing to have a race with Snuffy, but since everyone thinks Snuffy is imaginary, he can’t find anyone to judge the race- especially on such a hot day. Luckily, the man in front of the store is willing to oblige.

Big Bird gives Snuffy the low-down on the race, and they go for it. Since Snuffy is so slow, however, Big Bird ends up finishing before him.

Big Bird suddenly fears that he may have hurt Snuffy’s feelings by finishing before him. The man sees the issue from both sides, but points out that Big Bird can still be Snuffy’s friend. Just then, the man has to leave, and it is at that point that Big Bird finds out who he was just talking to: Fred Rogers!

Snuffy comes to the finish line, and tells Big Bird that he doesn’t feel bad for finishing last, because he knows that he and Big Bird are still friends. However, he doesn’t believe Big Bird when he hears that Mr. Rogers judged the race. This upsets Big Bird. He laments to Maria, “It was the most exciting day of my life, and I don’t want to talk about it!”

Good thing we have video.