Home Music The Monkees To Release Christmas Party, Their First Ever Holiday Album 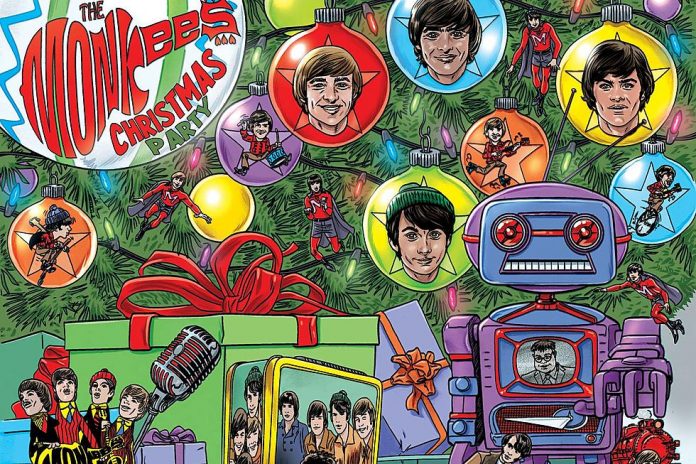 On CHRISTMAS PARTY, The Monkees put their unmistakable vocal stamp on a wide array of classic Christmas tracks, from the R&B holiday standard “Merry Christmas, Baby,” to Paul McCartney’s “Wonderful Christmastime” and Wizzard’s yuletide classic “I Wish It Could Be Christmas Every Day.”

After helming The Monkees’ critically acclaimed studio album Good Times! in 2016, Grammy® and Emmy®-winning songwriter Adam Schlesinger reprises his role as producer on CHRISTMAS PARTY All of the album’s 13 songs were recorded this year, with “Silver Bells” and “Mele Kalikimaka” using classic Davy Jones vocals from the archives combined with newly recorded music.

Much like Good Times!, CHRISTMAS PARTY features songs newly written for the band by a group of talented songwriters, including Rivers Cuomo of Weezer (“What Would Santa Do”) and Andy Partridge of XTC (“Unwrap You For Christmas”). Schlesinger and celebrated author Michael Chabon teamed up to write “House Of Broken Gingerbread.” Guitarists Peter Buck of R.E.M. and Scott McCaughey of The Minus 5 play on two songs – a cover of Big Star’s “Jesus Christ” and the album’s title track, which they wrote together.

CHRISTMAS PARTY also includes two songs with Michael Nesmith on lead vocals, with each track being produced by one of his sons. His take on the yuletide classic “The Christmas Song” was produced by Christian Nesmith while “Snowfall” was helmed by Jonathan Nesmith.

Over the years, The Monkees’ amassed a dozen Top 40 hits, including a trio of tunes that soared to #1. Between September 1966 and December 1967, “Last Train To Clarksville,” “I’m A Believer,” and “Daydream Believer” collectively occupied the top position for 12 weeks. Sales of their LPs were more phenomenal still: The Monkees occupied the #1 position for 13 consecutive weeks, and More Of The Monkees for 18 weeks. Both Headquarters and Pisces, Aquarius, Capricorn & Jones Ltd. went to the top as well, for a four-in-a-row feat in the incomprehensible space of 13 months. The final tally: 16 million albums and 7.5 million singles sold in a mere 2 1/2 years.

CHRISTMAS PARTY Track Listing
“Unwrap You For Christmas”
“What Would Santa Do”
“Mele Kalikimaka”
“House Of Broken Gingerbread”
“The Christmas Song”
“Christmas Party”
“Jesus Christ”
“I Wish It Could Be Christmas Every Day”
“Silver Bells”
“Wonderful Christmastime”
“Snowfall”
“Angels We Have Heard On High”
“Merry Christmas, Baby”