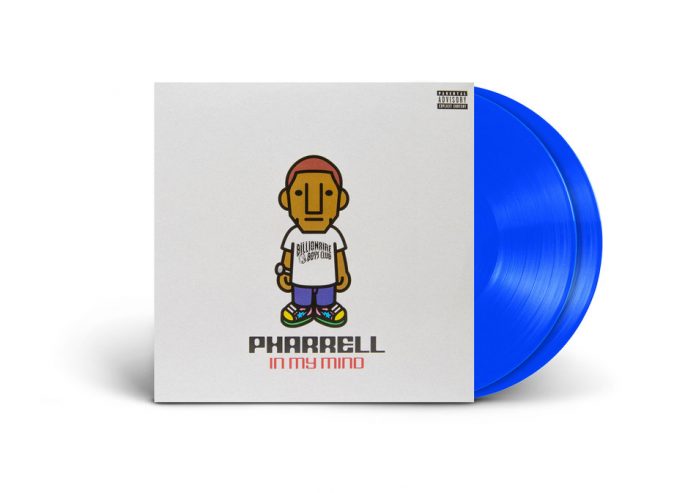 One-half of the super production troupe N.E.R.D, Pharrell Williams transcended his role as a simple beatmaker to cultural figure and fashion icon with his debut, In My Mind. Today, Urban Legends releases In My Mind in black 2LP vinyl and limited edition blue 2LP vinyl packages.

Pharrell’s In My Mind was not only a deviation from N.E.R.D’s hard-driving production style, but also a hugely successful debut for the artist turned tastemaker, moving close to 150,000 units within its first week of release. Pharrell’s first project minus longtime partner Chad Hugo, the album not only charted well internationally, but also hit number three on the Billboard 200.

In My Mind is a vibrant mix of out-for-self narratives wrapped in production that teeters between mainstream radio hits and smoothed out, heady tracks—all of it couched in a star-studded mixture of celebrated collaborations. “Stay With Me” features Pusha T’s intricately crime-driven bars, while “Number One” features Kanye West. In addition, Snoop Dogg makes an appearance on “That Girl” and Gwen Stefani pops in on the album’s opener, “Can I Have It Like That.” Towering iconic rap figure/CEO, Jay-Z, appears on “Young Girl/I Really Like You.”

The album is a polished effort, finding Pharrell’s mainstream-driven sights realized as he croons on some songs while delivering raps on others in an easy-to-follow approach that lends to the album’s commercial, easy listening aesthetic. None of the tracks are particularly gangster but the album has hard production edges (“Keep It Playa” featuring Slim Thug, for example). The cult of Pharrell grew astoundingly following this project and its catchy, varied soundscapes aided in making Pharrell the cultural figure he is now. In My Mind was nominated for a GRAMMY® in 2007 for Best Rap Album and it has sold more than two million units in the U.S. to date.

Pharrell Williams: In My Mind [2LP black vinyl; 2LP blue vinyl]
Side A
Can I Have It Like That (feat. Gwen Stefani)
How Does It Feel?
Raspy Shit

Side B
Best Friend
You Can Do It Too
Keep It Playa (feat. Slim Thug)

Side C
That Girl (feat. Snoop Dogg)
Angel
Young Girl/I Really Like You (feat. JAY-Z)
Take It Off (Dim The Lights)

Side D
Stay With Me (feat. Pusha T)
Baby (feat. Nelly)
Our Father
Number One (feat. Kanye West)
Show You How To Hustle (feat. Lauren)