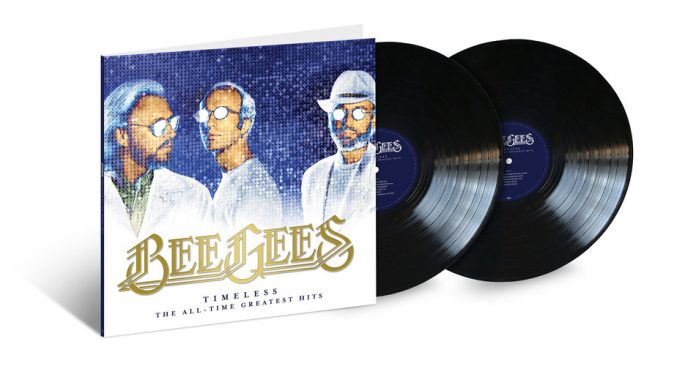 On October 26, Capitol/UMe will release the Bee Gees’ Timeless: The All-Time Greatest Hits in a 2LP vinyl edition. Already available on CD and digitally, the career-spanning collection of top hits by one of music’s most legendary and acclaimed groups features 21 tracks personally selected by Bee Gees co-founder Barry Gibb. Sequenced in chronological order, ‘Timeless’ spans decades of Bee Gees smash hits, from their first Australian chart-topper, 1966’s “Spicks and Specks” to “How Deep Is Your Love,” “Night Fever,” and “Stayin’ Alive” from Saturday Night Fever to 1987’s UK Number One single “You Win Again.”

“There is a spirituality about this album and these songs always meant the most to us,” says Barry Gibb in his written introduction for Timeless: The All-Time Greatest Hits. “Although there are many other songs, these songs, I feel, are the songs that Maurice, Robin, and I would be most proud of.”

The Bee Gees – brothers Barry, Robin and Maurice Gibb – have earned their stature as one of the world’s most popular and bestselling groups of all time. Having recorded 22 studio albums and for numerous soundtracks, including the monumentally successful Saturday Night Fever, the Bee Gees infused popular culture with dozens of worldwide hit singles that featured their singular and highly influential three-part harmonies. They achieved nine Number Ones and 23 Top 10 singles on the Billboard Hot 100 chart, including “How Deep Is Your Love,” “Night Fever,” and “Stayin’ Alive” from Saturday Night Fever, and graced charts around the world with many other classics, including “How Can You Mend A Broken Heart,” “I Started A Joke,” “Lonely Days,” “Words,” and “You Win Again.”

Among the honors bestowed upon the Bee Gees are five GRAMMY Awards®, as well as The Recording Academy’s Lifetime Achievement Award and Legend Award; five American Music Awards; a Brit Award for Outstanding Contribution to Music; and a Legend Award from the World Music Awards. They have been inducted into the Rock and Roll Hall of Fame, the Songwriters Hall of Fame, BMI Icons, the Vocal Group Hall of Fame, and the Dance Music Hall of Fame. All three brothers were appointed Commanders in the Order of the British Empire in 2001.