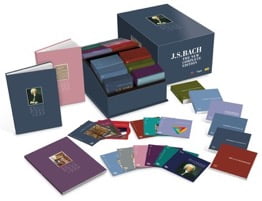 Deutsche Grammophon and Decca present Bach 333 – the biggest ever box set for a single composer. The 222 CD collection, which features 280 hours of music and weighs a whopping 13.5 kilos (about twice as heavy as a bowling ball) marks the 333rd Anniversary of J.S. Bach and will be released worldwide on October 26. It is a tribute to one of the most influential composers of all time – whose music has inspired artists for centuries, from Mozart and Mendelssohn to Procol Harum and The Beatles.

J.S. Bach – The New Complete Edition is the result of two years of curation and scholarship and has been developed with the co-operation of 32 record labels and a team of scholars at the Leipzig Bach Archive, with an introduction by its President, Sir John Eliot Gardiner whose documentary, Bach: A Passionate Life, appears on DVD for the first time as part of the set. There are two new hardback books in the collection featuring Dorothea Schröder’s acclaimed biography of Bach, 14 brand-new essays by leading scholars including Christoph Wolff, and a work-by-work musical commentary by Sir Nicholas Kenyon.

It would take nearly 12 days of constant listening to work through the set, with over 5,500 tracks capturing Bach’s complete oeuvre. The collection is colour-coded to allow easy navigation through his vocal, keyboard, orchestral and instrumental music. It conforms to the very latest historical research, with complete sung texts and translations, reproductions of key scores, and a guide to further online resources.

Highlights among 10 hours of entirely new recordings are 7 premieres: 6 alternative Chorale versions and Beethoven’s only completed arrangement of a Bach work, all recorded for the very first time. There is also a new recording of the Sonatas & Partitas for solo violin by period specialist Giuliano Carmignola.

Never before have so many artists and record labels come together in one collection. There are 750 hand-picked performers and ensembles including acclaimed Bach interpreters Sir John Eliot Gardiner, Masaaki Suzuki, Ton Koopman, Gustav Leonhardt and Nicolaus Harnoncourt. There are historically-informed performances from Christopher Hogwood, Reinhard Goebel, Paul McCreesh, Franz Brüggen, Trevor Pinnock, Christophe Rousset and Rinaldo Alessandrini, plus there are over 50 CDs of alternative recordings including modern piano performances from András Schiff, Murray Perahia, Angela Hewitt, Martha Argerich, Alfred Brendel and many more.

90 years of evolving Bach performance traditions in vocal and instrumental practice can be heard in legendary performances from a plethora of artists from Alfred Deller to Claudio Abbado, Willem Mengelberg to Karl Richter, Edwin Fischer to Glenn Gould, Pablo Casals to Pierre Fournier, Arthur Grumiaux to Anne-Sophie Mutter. There are also more than 20 historical organs featured in the set!

Bach’s influence has stretched across generations. This is reflected in 16 CDs entitled Bach Interactive and Bach after Bach which aim to show the composer’s impact; from Mozart and Beethoven to today’s masters such as Arvo Pärt and György Kurtág. There are albums devoted to Bach à la Jazz (Stéphane Grappelli, Stan Getz, Jacques Loussier, Bill Evans and more) and New Colours of Bach, with today’s leading remixers and composers reimagining Bach’s works.

All these new recordings and compilations will be released digitally to coincide with the box set. Additional digital tools (videos, playlists and more) are available online via the brand-new website www.bach333.com. There is also a section on the site entitled “Why 333?” which details Bach’s fascination with the number 3. At the core of Bach’s Lutheran faith was the Holy Trinity and the symbolism of 3 features heavily in his collection of organ works Clavier-Übung III (1739).

And so, 333 years after J.S. Bach’s birth, it seems fitting that the biggest composer box set ever created should honour the man whose prolific output has left his mark on musicians across the years and continues to inspire, astound and soothe music-lovers today.