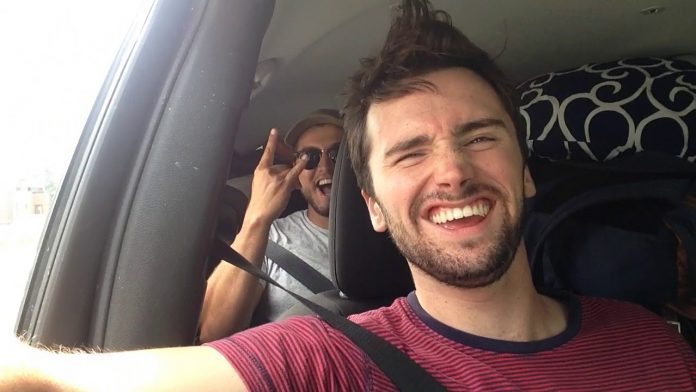 Canadian indie folk and roots singer/songwriter John Muirhead knows a thing or two about trying to get some shut-eye while on the road.

The London, Ontario-based artist has been touring nearly non-stop for the better part of the last two years, and his new single and video — available today — is John’s appreciative, candid, and behind-the-scenes perspective on life as an indie musician.

Two years of ambitious cross-Canada touring can produce a great many things: irreplaceable memories, life-altering experiences, unexpected challenges, a bit of self-discovery, and — for John — a new single.

Penned during moments of downtime between northern Ontario folk festivals all the way to speeding VIA Rail trains through the maritimes, the new track “I Can Sleep Anywhere” — available now — is Muirhead’s appreciative, eyes-wide-open ode to roughing it on the road as an indie music man. He recently stopped by CBC’s London Morning, Afternoon Drive, Up North, and London’s CHRW to talk all about it.

“It’s about the call to adventure, and playing your heart out even if the room is empty,” explains the self-described troubadour. “It’s is a reminder that every show — whether it’s on a moving train, a folk festival, a theatre or someone’s living room — could be my last, and that I truly love music, regardless of the ups and downs I face.”

Not that the talented songster should have much to worry about on that front; widely known for his storytelling songs that kindle late-night Canadian campfires, Muirhead’s distinct brand of indie folk has seen him nominated for a Canadian Folk Music Award, and an honourable mention in the Canadian Songwriting Competition.

From fingerpicked folk confessionals to upbeat roots-rock jams inspired by the likes of Frank Turner, Neil Young, The Weakerthans, and Julien Baker, Muirhead’s eclectic song collections across two EPs, Yesterday’s Smile and Foundational, reflect the highs and lows of love, ambition, and being a young musician.

The video for “I Can Sleep Anywhere” serves as much of a scrapbook as the lyrics; put together from a collection of Muirhead’s own iPhone videos spanning the last 24 months, it’s meant to reflect the joys and adventure that inspired the lyrics of the song. “I had no intention of putting these into a music video while I was filming but, when I finally had time to look through my old footage, I knew I needed to compile it all together.

“This was the perfect song for that.”

“I Can Sleep Anywhere” was produced by David Worthen and recorded at Vapor in Toronto. “We recorded it in a couple of sessions at the end of the summer, featuring Alex Lam on drums and Sam Fitzpatrick on bass,” Muirhead shares. “It was such a fun experience, we really tried to keep the energy of the track alive and I think we accomplished that.”

“I Can Sleep Anywhere” is available now.