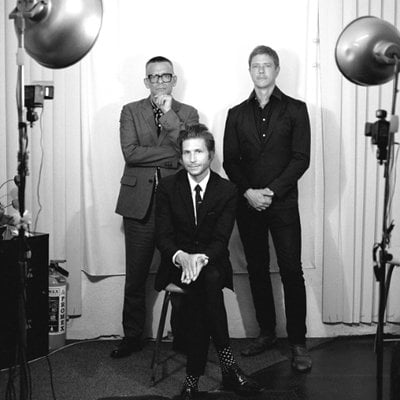 Do the lyrics on Marauder have any relation to social media and how everyone’s trying to present this perfect self? Is it a retaliation against it?

Not consciously. I do think we live in an age that, yes, there’s the perfect picture that people try to post. Maybe an even more interesting part about our kind of world is the way that people’s careers can end overnight – from things that they said five years ago, or bad behaviour that surfaces. It’s an interesting age, because I feel like comedy is now getting subjected to it, which is a bit dangerous as there are forms of art that are about pushing the envelope, and if we were to hold everybody accountable for making little missteps in the pursuit of art and how that no longer fits into the current model of PC.

On the one hand, there are tremendous cultural shifts happening that are absolutely for the better, but even in the #MeToo movement – that’s absolutely a positive cultural change, it’s amazing that it’s really taken effect – even along the way of that wave there’s some collateral damage, or some people getting their careers ended or put on pause over allegations that aren’t even yet all the way looked into. It’s an interesting time, where everything seems at stake – it’s fascinating the world we live in.

Recently, the Director James Gunn was dropped from Guardians Of The Galaxy over social media posts he made a decade ago. It seems you now need to be impeccable at all times.

I just wonder if it’s a little bit Brave New World or 1984, in the sense that now everyone’s policing everyone. It’s good in so many ways, and then there’s this other side where culture makes a massive correction; sometimes there are going to be things that get corrected that means people are going to get into trouble, that shouldn’t have got into trouble. That’s the price of social change, I guess. I would never say it’s good or bad, I’d just say it’s interesting.

With your music and interviews, are you finding yourself being more careful about what you say? I was surprised to find that you have a personal Twitter account.

I always was mindful of Twitter, I don’t think I ever said anything that could get me into hot water…I think my approach is a little bit to be goofy, that’s how I use social media because it’s not really natural for me to do any of that stuff.

I don’t drink, but God forgive if you’ve just had a couple of glasses of wine..I’ve had it happen to people that are close to me, text something that I think is hilarious – or, you realise that did not translate over text and you turn somebody off. God forbid you do that on fucking social media and jeopardise your whole career. I’ve always been pretty mindful.

But, that’s what I mean, especially comedians. They might be trying out material and if you take it out of context…I’ve definitely had pull quotes in interviews where it’s like, “Oh shit, in context I think that wasn’t so bad but out of context it’s terrible.”