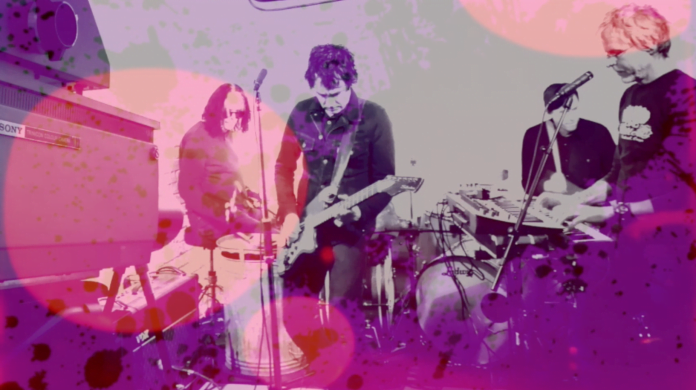 In anticipation of his US tour beginning this Friday in Philadelphia, legendary rabble-rouser JON SPENCER and his revolutionary band of sonic avengers, the HITMAKERS, are unleashing their groovy, poptastic video for their latest smash “Beetle Boots” today.

The track appears on Spencer’s cryptically titled debut solo album, Spencer Sings The Hits! out now via In The Red Records.

The first-ever solo record from Jon Spencer, a milestone in a legendary career that has spanned three decades of brain-splattering innovation, groovy-ghoulie noise, and swank-as-fuck salvation!

Often imitated, never duplicated, the original NYC underground-rock legend returns from the wilderness with twelve red-hot hits, each more powerful than the last!

This is Garage Punk for Now People, weaponized with sci-fi skronk and industrial attitude, calibrated for the Revolution, a Molotov cocktail of sound guaranteed to destroy any post-modern hangover!

JON SPENCER, THE BLUES EXPLOSION MAN who put the BELLBOTTOMS on BABY DRIVER! The Top Cat who spread the Secret Sauce in BOSS HOG! The Rockabilly Right-Hook from Heavyweight Outlaws HEAVY TRASH! The Swank-Fucking Master of PUSSY GALORE is back, bringing the hits to Your Town USA!

Says Spencer: “This is the truth serum the world has been craving, the beginning of a new rock’n’roll rebellion that takes no prisoners and puts the squares on ice!”